Guangdong companies are showing their growing enthusiasm and ambition for participating in the construction of the Belt and Road Initiative and many have quickly attained foreign investment...

Guangdong companies are showing their growing enthusiasm and ambition for participating in the construction of the Belt and Road (B&R) Initiative and many have quickly attained foreign investment, allowing greater potential to reach the international market.

By the end of 2016, 884 Guangdong-invested companies have been set up along the B&R countries and regions, with an investment of 14.66 billion USD in consultation and an actual investment of 4.206 billion USD to date, according to a newly-released report.

Co-compiled by the Information Office of the People’s Government of Guangdong Province, the Research Center of State-owned Assets and Administration Commission of the State Council of China and Peking University’s Guanghua School of Management, the report was firstly released by Zhen Yanxiong, Executive Deputy Director of Guangdong’s Publicity Department, at the 21st Maritime Silk Road Forum on International Communication and China (Guangdong) Companies Going Global in Zhuhai.

The report is the result of Guangdong’s efforts to fully implement the guidelines released on the 19th National Party Congress, thus playing a significant role in encouraging innovation and providing future guidance. 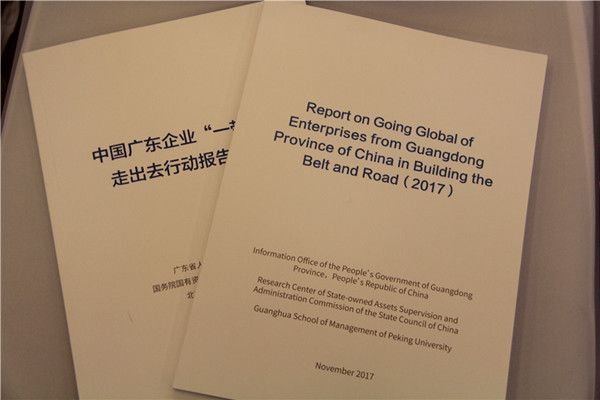 The report on Going Global of Enterprises from Guangdong Province of China in the Belt and Road (2017). [PhotoNewsgd.com]

It also points out the opportunities and directions for enterprises involved in implementation of the Initiative and provides those enterprises which operate internationally or plan to do so; providing a reference for their decision-making as regards finding the right time, targeting the right sectors and working out the right strategies and action plans.

At the same time, the report showcases the successful practice of outstanding enterprises from the province in advancing win-win and sustainable cooperation with countries along the Belt and Road.

The report highlights ZTE as a Guangdong-based global leader in telecommunication and information technology who is committed to innovation and providing product solutions for telecommunication operators and business customers in more than 160 countries and areas. Now the company has entered more than 50 countries included in the Belt and Road initiative, providing 3G and 4G mobile network services for host countries, helping bridge the digital gap between developing and developed countries.