The Communist Party of China (CPC), the world's largest governing party, celebrated its centenary on Thursday with a solemn ceremony and the grand accomplishment of "building a moderately prosperous s 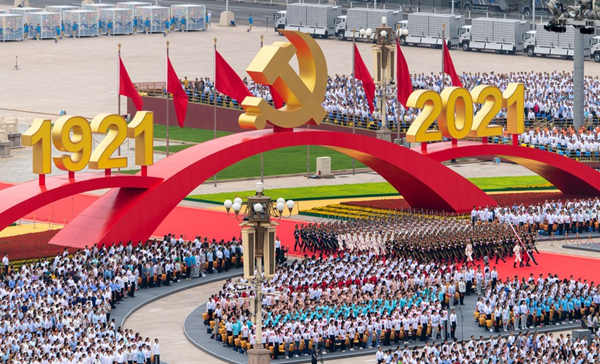 A national flag-raising ceremony is held at Tian'anmen Square during a ceremony marking the centenary of the Communist Party of China (CPC) in Beijing, capital of China, July 1, 2021. (Xinhua/Liu Jinhai)

The Communist Party of China (CPC), the world's largest governing party, celebrated its centenary on Thursday with a solemn ceremony and the grand accomplishment of "building a moderately prosperous society in all respects."

At 100, the CPC is loaded with vigor and all set for tests ahead as China continues the journey to "build a great modern socialist country in all respects."

Speaking at the ceremony on Tian'anmen Square at the heart of Beijing, Xi Jinping, general secretary of the CPC Central Committee, said that over the past century, the CPC has secured extraordinary historical achievements on behalf of the people.

"Today, it is rallying and leading the Chinese people on a new journey toward realizing the second centenary goal," proclaimed Xi, also Chinese president and chairman of the Central Military Commission.

Over 70,000 people cheering with exhilaration thronged the public square, festooned with red flags and a large Party emblem installation. It was a celebratory aura -- golden figures of "1921" and "2021" represented the 100-year timeline, aircraft flew past in echelons overhead and a 100-gun salute roared through the sky.

The Chinese civilization has lasted five millennia, but the country plunged into a century of humiliation due to the corrupt feudal rule and invasion by Western powers. Many attempts were made to salvage the nation and all ended in failure.

Through a century of endeavors, the CPC led the people to overthrow the "three big mountains" of imperialism, feudalism, and bureaucrat-capitalism, founded a new China, pioneered the path of socialism with Chinese characteristics, and built a poor state into the world's second-largest economy.

With merely over 50 members at the time of its founding, the CPC today is the world's largest governing party with more than 95 million members, leading a country of more than 1.4 billion people. It also enjoys tremendous international influence.

The Tian'anmen Rostrum, where Xi made his speech, stands witness to history. This was where Mao Zedong proclaimed the founding of New China in 1949. It also saw people in festive parades paying respect to Deng Xiaoping, the architect of reform and opening-up in 1978 that has led China to moderate prosperity.

Martin Albrow, a renowned British sociologist, said the CPC's promoting the building of a human community with a shared future and the development of the Belt and Road Initiative through joint efforts are benefiting the world.

The Party's 100th anniversary is marked across China and congratulatory messages were also sent from space station core module Tianhe about 400 km away from Earth.

The profound changes that the CPC has brought to China and its deep impact on the world have led many to decode the formula to the Party's success.

The firm leadership of the Party, its people-centered philosophy of development and upholding socialism with Chinese characteristics are considered to be among the most important factors and hallmarks that distinguish it from other political parties.

In a joint congratulatory message, the non-CPC political parties, the All-China Federation of Industry and Commerce, and personages without party affiliation said they have kept in mind the original aspiration of cooperation, and will continue to stand and work together with the CPC.

Faced with changes unseen in a century, the journey ahead is bound to be challenging.

In his remarks, Xi called on the Party to continue its great founding spirit. It is comprised of the principles of upholding truth and ideals, staying true to the original aspiration and founding mission, fighting bravely without fear of sacrifice, and remaining loyal to the Party and faithful to the people.

"Looking back on the path we have traveled and forward to the journey that lies ahead, it is certain that with the firm leadership of the Party and the great unity of the Chinese people of all ethnic groups, we will achieve the goal of building a great modern socialist country in all respects and fulfill the Chinese dream of national rejuvenation," Xi said.