The ethnic dance drama depicts a journey of transformation of two lion dancers in the face of love and hate along with the dilemma of choosing between family and the nation, reflecting the perseveranc

The "MGM Awakening Lion," an exclusive and tailor-made version of the award-winning Chinese ethnic dance drama "Awakening Lion" will make its premiere at MGM COTAI in Macao this July. 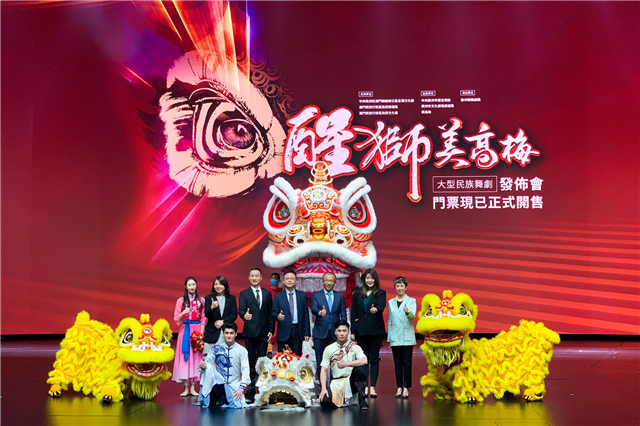 The "MGM Awakening Lion" launch event is held at the MGM Theater, MGM COTAI in Macao on May 10, 2021. (Photo provided to Newsgd.com) 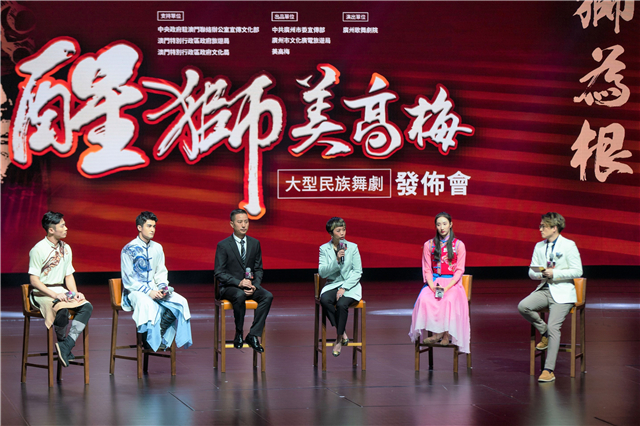 "Wherever there are Chinese, there are lion dances." The original ethnic dance drama "Awakening Lion" is the first large-scale dance drama in China using Cantonese lion dance as its theme. Named the best dance drama by the most prominent dance award in China – the China Dance Lotus Awards, the piece is a cluster of multiple cultural art elements including the lion dance, Southern Fist (Nanquan), dance performance and other traditional folk intangible cultural heritage.

The ethnic dance drama depicts a journey of transformation of two lion dancers in the face of love and hate along with the dilemma of choosing between family and the nation, reflecting the perseverance of the Cantonese people. A drama without dialogue, it achieves bold innovations in stage music, design, lighting and costume, and demonstrates the unique artistic charisma of the repertoire, whilst telling the story of the Guangdong lion dance and Lingnan culture. 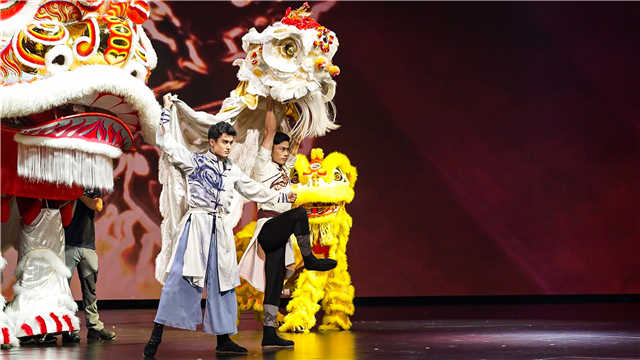 The main cast members Iiliwan Umar and Peng Guanyu perform on stage during the event.(Photo provided to Newsgd.com) 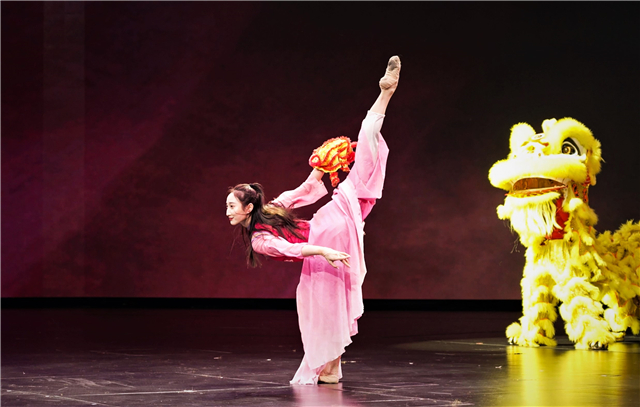 The main cast member Zhu Jinhui performs on stage during the event. (Photo provided to Newsgd.com)

The 70-minute drama "MGM Awakening Lion", jointly presented by MGM and Guangzhou Song and Dance Theatre, is re-arranged and tailor-made accommodating the cutting-edge technology and state-of-the art equipment of the MGM Theater. Retaining the plot and the strongest Lingnan cultural characteristics from the original dance drama, the pace of the drama has been enhanced, becoming more upbeat.

Pansy Ho, Co-Chairperson and Executive Director of MGM China Holdings Limited, said online at the launch event, "The 'MGM Awakening Lion' is a brand-new mode of experiencing Macao with a wide range of events created with the lion persona as the core. The residency show shares the common goal of building Macao into 'a base for exchange and cooperation with Chinese culture as the mainstream and the coexistence of different cultures'. It aims to deepen exchanges of cultural tourism in the Guangdong-Hong Kong-Macao Greater Bay Area (GBA) and to promote its high-quality development in humanity and culture." 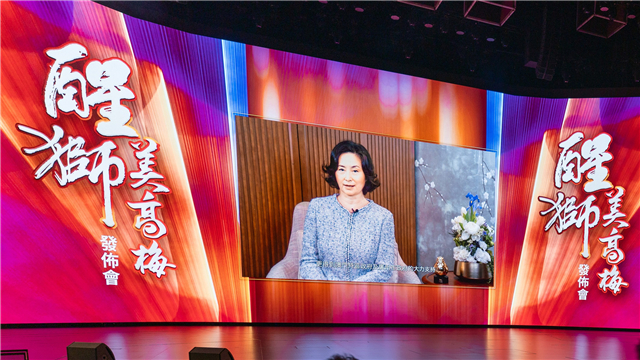 Shi Qianjin, Artistic and Chief Director of "MGM Awakening Lion" and President of Guangzhou Song and Dance Theatre, shared at the launch event: "The 'MGM Awakening Lion' is not only a breakthrough of the original 'Awakening Lion', but also a significant symbol of cultural unification in the GBA. The show showcases intangible heritage elements through artistic and unconventional means, leveraging the advanced technologies of the MGM Theater."

Starting from July 8, 2021 to February 12, 2022, the innovative ethnic dance drama will be staged at the MGM Theater in four rounds with 32 performances. Tickets are available now at online platforms such as MGM Official Website, Damai.cn, MacauTicket.com and Klook. You can also buy tickets at designated travel agencies and MGM Theater Box Office, or call (853) 8802 3833 (available 24/7) or send email to ticketing@mgm.mo for more information. Ticket prices range from MOP 280 to MOP 600. 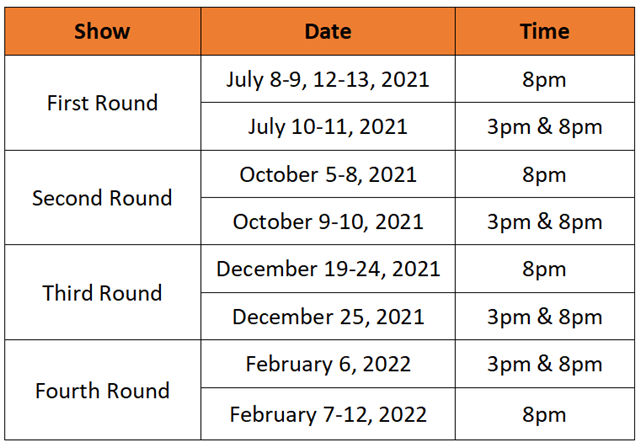 In addition, MGM showcased the Guinness World Records holder "The Largest Dancing Lion" created in 2010 at the launch event. This gigantic lion is 20 times larger than the usual dancing lion (6.2m in length, 4.36m in height and 2.1m in width), and the head itself weighs 250 pounds, which takes four well trained lion dancers to operate it. 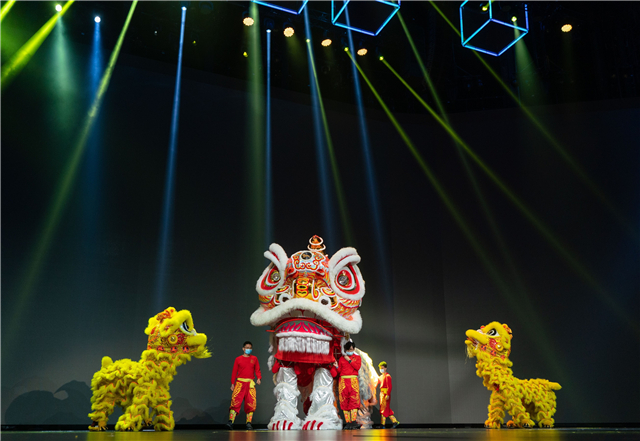 "The Largest Dancing Lion" will be on display from May 11 onward at MGM COTAI's Spectacle, which is the record holder of the largest free-span grid-shell glazed roof (self-supporting), the first ever architectural and structural Guinness World Records title for Macao.

"MGM Awakening Lion" has the support of the Department of Publicity and Culture of the Liaison Office of the Central People's Government in the Macao SAR, Macao Government Tourism Office and Macao's Cultural Affairs Bureau. The show is co-produced by the Publicity Department of the Guangzhou Municipal Committee of the Communist Party of China, Guangzhou Municipal Culture, Radio, Television and Tourism Bureau, and MGM.