Scotty Cox, an American actor who played Henry Kissinger in the TV drama “Diplomatic Situation” comments in the exclusive interview with Newsgd.com.
.

This year marks the 50th anniversary of Ping-Pong Diplomacy. “Had there been no Ping-Pong Diplomacy, no opening up between China and the United States, I wouldn't be here. I'm so thankful to have met my wife and have a young son, and that we live here.”

Scotty Cox, an American actor who played Henry Kissinger in the TV drama “Diplomatic Situation” comments in the exclusive interview with Newsgd.com. In this episode, we invited Scotty to look back on the Ping-Pong Diplomacy between China and the United States, and decode why China will never fail from his perspective. 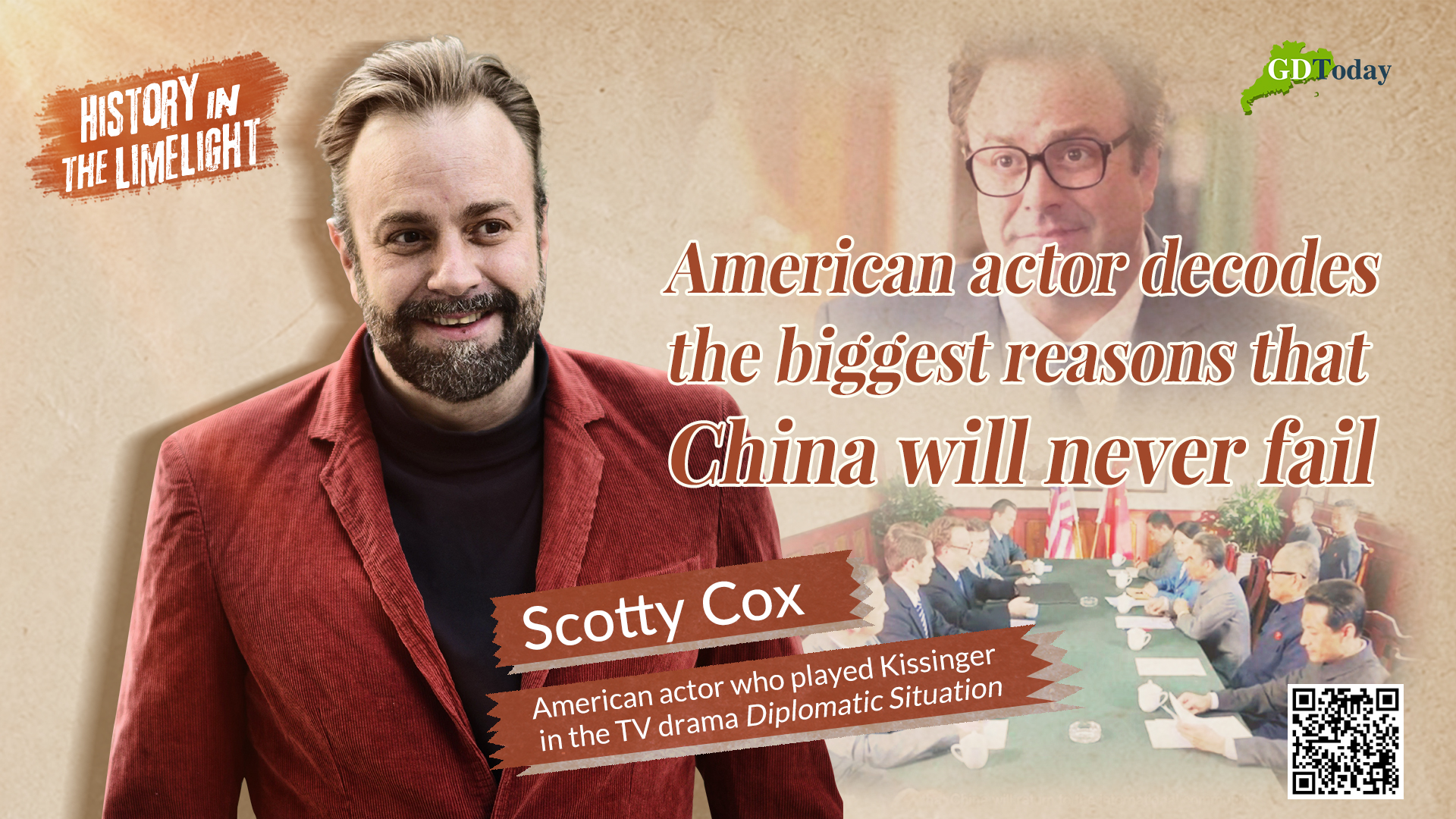 In Scotty’s mind, Ping-Pong Diplomacy did change the world; Kissinger was the right person at the right time to help president Nixon come around to the idea of opening things up with China.

In the wake of Ping-Pong Diplomacy, in July 1971, Kissinger secretly came to China through Pakistan. It was followed by Nixon's ice-breaking trip and more high-level visits. Leaders of the two countries jointly promoted the development of diplomatic relationship between two countries with different national conditions. On January 1, 1979, the two major countries officially established diplomatic relations at the ambassadorial level.

In 2010, when Scotty was working in an elementary school in the US, he met his wife. She was teaching Chinese in a Confucius Institute. Scotty developed great interests in Chinese language and culture. “I had a chance to perform Chinese songs, and I learned calligraphy and Tai Chi. There are so many different things about Chinese culture.” Scotty said.

Although Scotty had already had a stable job in the education system in the US, he gave it up and chose to come to China. “In my life I just was so afraid for things to stay the same. I wanted to change and I knew the change that I wanted was going to be here. I was going to be with my wife.”

Having lived in China for nearly 10 years, Scotty believes coming to China was the best thing that ever happened to him. Not only because of having a wonderful family, but also his love for the life in China. “I feel so fortunate to be here.” He has realized so many dreams in China. The American actor has been in over a hundred different productions these years.

As the father of a boy in a China-US family, he sincerely hopes that the China-US relationship will strengthen, rather than deteriorate. He wants his son to be proud of both places. “I want our two nations to be prosperous together and get along peacefully. When the relationship is good between our two countries, there isn't this inner conflict with him. Whereas if we are adversaries, that's hard at a child.” It is a sincere hope of a father.

By playing a role in “Diplomatic Situation”, Scotty got a broader view of Chinese history and its development during the late 20th century. He believes that China’s remarkable achievements in the past 100 years have benefited from the hard-working spirit and unity of the Chinese people, as well as from the visionary leadership of the Communist Party of China.

“You have very intelligent, very forward-thinking leadership around a large hard-working populace that values education, business and family. I think those are the biggest reasons that China will never fail.”