President of the UN Sustainable Development Solutions Network: China has proven that we can end poverty

China announced on July 1 that it has realized its first centenary goal — building a moderately prosperous society in all respects. As an active contributor to the implementation of the United Nations

China announced on July 1 that it has realized its first centenary goal — building a moderately prosperous society in all respects. As an active contributor to the implementation of the United Nations (UN) 2030 Agenda for Sustainable Development, China has been assisting other developing countries to reduce poverty, boost agricultural progress, support equal access to education, improve infrastructure, and speed up industrialization. 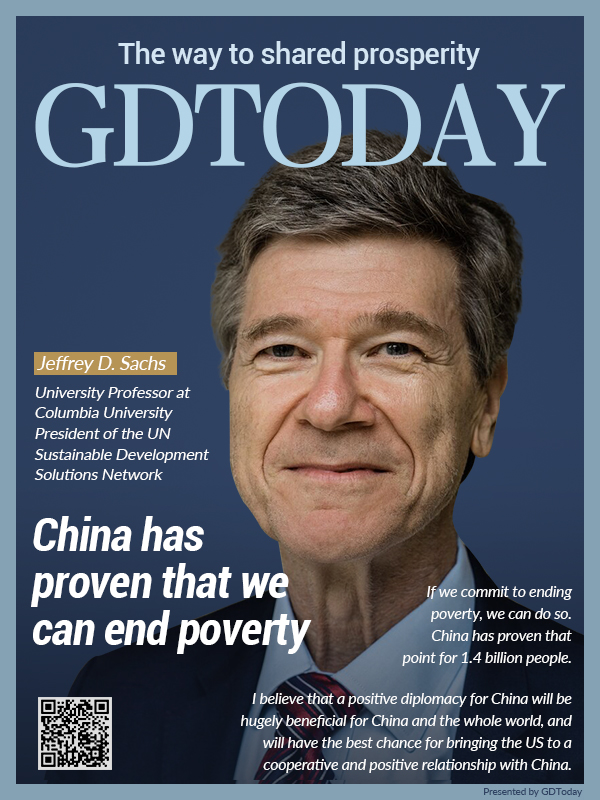 Jeffrey D. Sachs, University Professor at Columbia University and the President of the UN Sustainable Development Solutions Network, shared his insights of sustainable development and China's moderately prosperous society (or ‘Xiaokang') in an exclusive interview with GDToday & Newsgd.com.

The key to ending poverty is investment

GDToday: As an SDG Advocate for UN Secretary-General António Guterres on the Sustainable Development Goals (SDGs), and an expert in fighting against poverty, what made you first decide to focus on this field?

Jeffrey Sachs: We live in a rich world, but still have poverty. This is a moral injustice, a terrible blight for the poor, and a danger to the world. If we commit to ending poverty, we can do so. China has proven that point for 1.4 billion people.

GDToday: From the perspective of an economist, what economic tools shall we notice or can we use to eradicate extreme poverty, especially in the post-pandemic future?

Jeffrey Sachs: The key to ending poverty is investment – in education, health-care, infrastructure, innovation, and business development. China saved at high rates (over 40% of national income) and invested heavily in all of these key areas. By doing so, China achieved rapid economic growth and a rapid decline in poverty.

GDToday: On July 1, China has realized its first centenary goal -- building a moderately prosperous society in all respects. Could you share your view on what brings China to ‘Xiaokang'?

Jeffrey Sachs: China faced many foreign difficulties in the 19th century and first half of the 20th century, starting with the Opium Wars launched by the British empire, the impositions by the European and US imperial powers, the civil war and the invasion by Japan. By 1949, China was one of the poorest places in the world. Since the start of the People's Republic of China, and especially since the opening-up policy starting in 1978, China has rapidly recovered lost ground and is now in the forefront of global innovation. This has brought China to ‘Xiaokang', and will bring China to increasing prosperity in the years ahead.

I have visited most regions of China, from the coasts north and south, the mid-interior, and the far western regions. I have been to many of China's poorest areas. What struck me on these visits was the progress being made, even in the poorest regions. The government directed resources to the poor parts of the country and this made an important difference.

Jeffrey Sachs: China is achieving great progress on key dimensions of well-being: rising material conditions of life, longer life expectancy, more leisure time, better education, and technological innovation. In future years, a key objective should be sustainable development – meaning that higher living standards are combined with social inclusion for all parts of society, and environmental sustainability. China can and should be a leader in environmental sustainability, meaning renewable energy, sustainable land use, protection of biodiversity, and a circular economy to end pollution.

GDToday: In order to better achieve the SDGs and shared prosperity in the post pandemic era, what are the pressing problems for the world? As we can see there are tensions underlying between the 'super-powers'.

Jeffrey Sachs: It is very important for China, Europe, the US, and other regions (ASEAN, Africa, Latin America, the Arab Region) to work together to promote sustainable development. The US political class is jealous of China's rapid progress, so it is trying to provoke a division with China. This is very harmful and shortsighted. China should not respond in kind, but rather should reach out the hand of friendship to Europe, Africa, and the rest of the world. I believe that a positive diplomacy for China will be hugely beneficial for China and the whole world, and will have the best chance for bringing the US to a cooperative and positive relationship with China.

The Belt and Road Initiative (BRI) is important both for China and its partners, by promoting a modern, 21st century infrastructure. It is very important that BRI should be a “Green BRI,” meaning that it promotes renewable energy and a 5G-based digital society.