China is a critical part for global recovery from COVID-19: Former Prime Minister of Finland

“Global cooperation has only important positive consequences for the global community,” said Esko Aho, former Prime Minister of Finland and executive vice-president of Nokia, during the 2021 Imperial Springs International Forum.

Themed the “Multilarteralism 2.0: Global Cooperation in the Post Pandemic Era”, the 2021 Imperial Springs International Forum is being held in Guangzhou from December 5 to 6.

“Global cooperation has only important positive consequences for the global community,” said Esko Aho, former Prime Minister of Finland and executive vice-president of Nokia, shared his views on this year’s topic with GDToday. 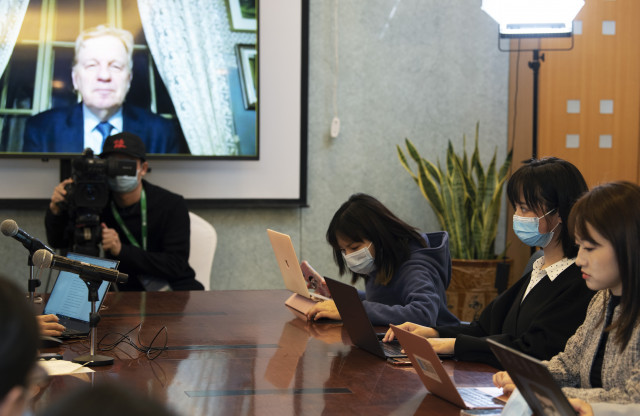 GDToday reporter (in black) in the interview with Esko Aho

The United Nations Climate change conference concluded in Glasgow on November 13. After a one-day extension, global negotiators signed the historic Glasgow Climate Pact to strengthen their 2030 emissions reductions targets by the end of 2022, and asked rich nations to "at least double" the amount of money they give developing countries to adapt to climate change.

China and the United States especially, issued a joint declaration on improving actions on climate change in the 2020s, which are widely welcomed by global counterparts.

The two countries agreed to establish a working group on enhancing climate action this decade to promote cooperation on climate change between the two countries as well as multilateral processes.

“It's very difficult to imagine that we can succeed in limiting carbon dioxide emissions in the world without China and the US,” said Mr. Aho.

According to the former Finnish PM, roughly 40 % of carbon dioxide emissions are coming from these two countries. However, he felt optimistic about solving the climate change problem.

“China and the US are the countries with technological superpowers,” Mr. Aho stressed. “Technological development is going to bring a lot of the tools to fight against the climate change.”

“That's also why commitment from China and the US is so important,” he added.

“They're able to create attention to these problems rather than create solutions,” Mr. Aho indicated that the climate change problems should be worked out by the joint efforts from governments, companies and academic institutions.

In October this year, the government of China has issued an action plan to peak carbon dioxide emissions before 2030.

According to the action plan, by 2030, the share of non-fossil energy consumption will be around 25 percent, and carbon dioxide emissions per unit of GDP will drop by more than 65 percent compared with the level registered in 2005.

Furthermore, a promise has been made that China will achieve carbon neutrality by 2060 and fully established a clean, low-carbon, safe and efficient energy system, with energy efficiency reaching an advanced international level.

2021 marks the 100th anniversary of the founding of the Communist Party of China. In this year, the promise that building a moderately prosperous society in all respects were realized, and more than 100 million people in China have shaken off poverty. As an incredible achievement around the world, the commitment cannot be completed without the leadership of the CPC and great contributions from a huge number of CPC members.

“China has changed in the right way,” said Mr. Aho. “I was able to imagine what kind of economic, social, and technological progress to take place in China when looking at it in the 1970s.”

It has been more than 40 years since China has implemented the Reform and Opening-up. “This opening-up policy was a great success story, and it was based on the idea that the Chinese system has to be able to understand what's going on in the outside world.” Mr. Aho comments.

According to statistics published by Chinese Bureau of Statistics, Chinese GDP now increased around 40 times compared to that of 1978, amounting to 100 trillion yuan historically in 2020.

“China has been able to use economic policy tools in an efficient way in getting rapid recovery from the COVID-19,” Mr. Aho said, adding “this economic disaster we expected to happen, it is not there. One reason for that is that the global community has made substantial investments in recovery. China has been a critical part of that.”

Views on democracy may differ, while human needs and interests are running on the same problems

On December 4, China's State Council Information Office released a white paper titled "China: Democracy That Works." It said, China did not duplicate Western models of democracy, but created its own.

According to the white paper, over the past hundred years, the CPC has led the people in realizing people's democracy in China. The Chinese people now truly hold in their hands their own future and that of society and the country.

“For sure we have different interpretations of basic rights, but I think we have good reasons to try to understand them as a similar way as possible.” In Mr. Aho’s mind, it is not going to be easy since it's a difficult issue not only because of political reasons, but cultural, historical reasons.