​A key UN conference kicked off Monday in southwest China's Kunming to discuss a blueprint for biodiversity conservation over the next decade. 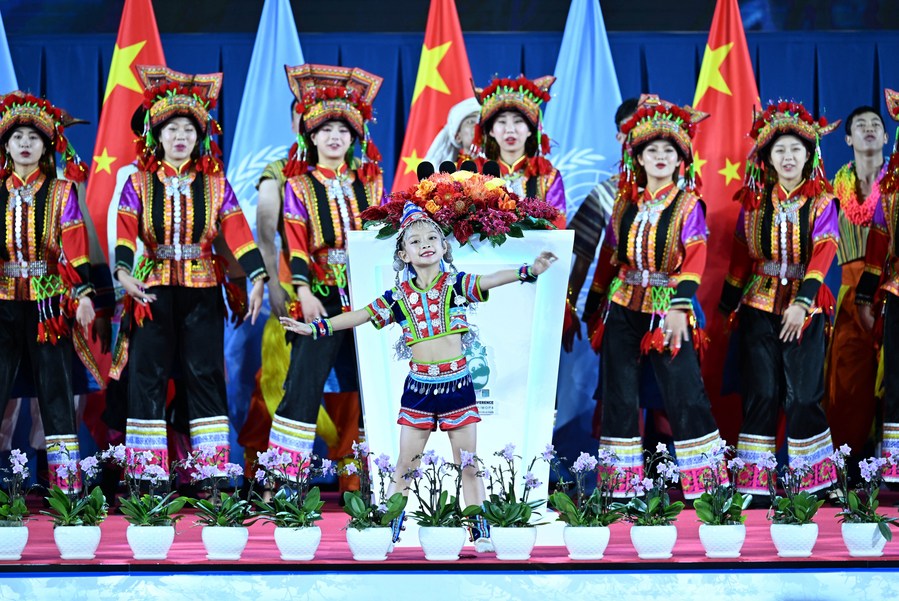 Folk artists perform during the opening ceremony of the 15th meeting of the Conference of the Parties to the Convention on Biological Diversity (COP15) in Kunming, southwest China's Yunnan Province, Oct. 11, 2021. (Xinhua/Chen Yehua)

A key UN conference kicked off Monday in southwest China's Kunming to discuss a blueprint for biodiversity conservation over the next decade.

This comes at a time when the world is facing a rapid loss of biodiversity. In person or virtually, over 5,000 representatives from governments, international organizations, research institutes and enterprises are attending the event, known as COP15, or the 15th meeting of the Conference of the Parties to the Convention on Biological Diversity.

Themed "Ecological Civilization: Building a Shared Future for All Life on Earth," it is the first global conference convened by the United Nations to highlight ecological civilization, a philosophy proposed by China.

At the opening ceremony of COP15, key figures in global biodiversity conservation called on all parties to the Convention to take concrete actions and collaborate more closely in reversing the alarming trend of biodiversity loss.

To meet the 2050 vision of living in harmony with nature, the world must take action this decade to reverse biodiversity loss and "put biodiversity on a path to recovery by 2030 at the latest," said Elizabeth Maruma Mrema, executive secretary of the Convention on Biological Diversity, who attended the meeting in person.

She said world leaders have made some bold commitments given the urgency for action, and now it is time to translate these commitments into policies, actions and results.

"Together, we can work toward an ecological civilization, building a shared future for all on earth," she added.

"As the UN secretary-general has said, making peace with nature is a defining task of the 21st century," she noted.

Andersen urged all parties to the Convention to take clear and tangible actions to deliver the post-2020 global biodiversity framework and place nature at the heart of decision-making.

"We need more solidarity and multilateralism to do more things," Fouad said.

"I would like to express my admiration for the actions that China has taken to protect and restore biodiversity," said Mrema. "I'm also deeply encouraged to see that the engagement of the many non-state actors is rising considerably in China and worldwide."

China was among the first countries to become a party to the Convention on Biological Diversity, which entered into force in 1993. The Convention currently has 196 parties, and the Conference of the Parties is the highest mechanism for discussing and making decisions on the Convention.

Chinese Vice Premier Han Zheng on Monday called for efforts to promote a comprehensive, balanced, strong and implementable consensus and action framework, so as to push global biodiversity governance to a new level at the opening ceremony of COP15.

Han, also a member of the Standing Committee of the Political Bureau of the Communist Party of China Central Committee, put forward three initiatives to all participants.

First, multilateralism should be upheld, and dialogue and exchange should be promoted to formulate the post-2020 action plan in a scientific, ambitious and pragmatic way.

Second, investment should be boosted and resources mobilized to provide greater support for the protection and sustainable utilization of biological diversity. Third, reform should be accelerated, and biodiversity conservation should be prioritized to intensify the protection and restoration of ecosystems, and to address global environmental challenges such as climate change, biodiversity loss and food security.

Han also stressed that China will take more vigorous and concrete measures to promote biodiversity conservation in the future.

COP15 will take place in two parts. The first part, scheduled for Oct. 11 to 15, is expected to adopt a declaration that experts said would build momentum on the cause of biodiversity conservation. Participants will also focus on the development of the post-2020 global biodiversity framework to guide conservation actions worldwide through 2030.

A forum on ecological civilization will also be held as a sideline event of the meeting from Oct. 14 to 15, which will cover a range of topics including coping with climate change and nature-based ecological protection and restoration.

The second part of the meeting, to be held offline in the first half of 2022, is expected to see the finalization and adoption of an ambitious and practical post-2020 global biodiversity framework.