Chinese President Xi Jinping on Monday called for strengthening practical cooperation between China and Greece, as the two countries are seeking to consolidate their comprehensive strategic partnershi 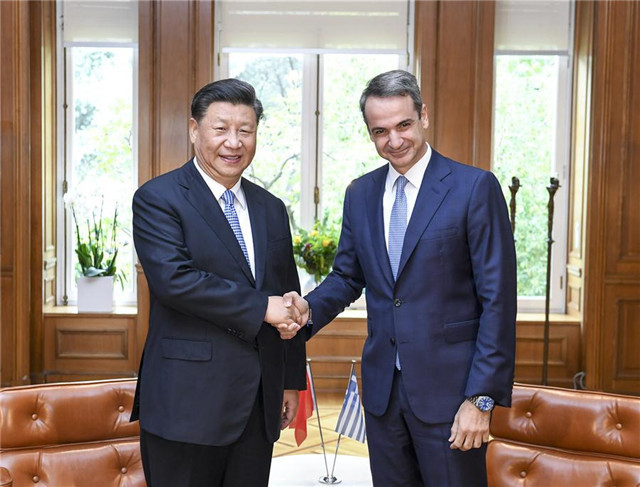 Chinese President Xi Jinping on Monday called for strengthening practical cooperation between China and Greece, as the two countries are seeking to consolidate their comprehensive strategic partnership.

China and Greece are both ancient civilizations, and should join hands to deliver greater benefits to their people and further contribute to human progress, Xi said during his talks with Greek Prime Minister Kyriakos Mitsotakis.

The two leaders just met a week ago in Shanghai when Mitsotakis led a delegation to attend the second China International Import Expo (CIIE).

Statistics show that the transaction volume of Greek businesses at the expo grew by 2.5 times compared with that at the first CIIE one year ago, Xi said.

He pledged that China will unswervingly expand opening-up and stands ready to bring more opportunities to the development of all countries, including Greece.

On practical cooperation, Xi proposed that the two countries should focus their efforts on the following four areas:

First, the two sides should seek greater synergy between joint construction of the Belt and Road and Greece's strategy of building itself into an important international logistics transit hub.

Second, the two sides should expand two-way trade and investment, and enhance cooperation in such areas as electricity, telecommunications, manufacturing and finance. China is willing to import more high-quality Greek agricultural products and encourages more capable Chinese companies to invest and start businesses in Greece.

Fourth, the two sides should jointly advance the China-European Union (EU) ties. Greece is an important member of the EU and also an important country in the Balkan region. The China-Central and Eastern European Countries (CEECs) cooperation mechanism enriches the meaning of the China-EU comprehensive strategic partnership, and China is willing to work with Greece to consolidate the cooperation mechanism and jointly safeguard multilateralism and free trade to achieve all-win results.

Xi stressed that equal respect, friendly cooperation, opening-up and inclusiveness, and enterprising spirit are shared characteristics of the two great nations, and also the powerful driving force for the two sides to seek development with joint efforts.

He said that he believes that with concerted efforts of both sides, bilateral relations will deliver more fruitful results and the two countries will make greater contributions to the building of a community with a shared future for mankind.

For his part, Mitsotakis said that China is a great ancient civilization and plays a decisive role in promoting world peace and development.

The achievements of China's economic development are unique and can be called a miracle of human society, he said, noting that China's further opening-up will provide more opportunities for all countries, including Greece.

Greece-China cooperation is of strategic significance, and the Greek people thank China for its valuable assistance during the financial crisis, the prime minister said.

He pledged that Greece will continue to firmly support China on issues concerning China's core interests, and Greece will take an active part in the joint construction of the Belt and Road to build the Piraeus Port into the largest port in Europe and promote Eurasian connectivity.

Greece hopes to become a gateway for China to enter the European market and welcomes more Chinese businesses to invest and start businesses in Greece, which will strongly promote economic growth and local employment, he said.

He also expressed the hope that the two sides will strengthen exchanges and cooperation in shipping, energy, e-commerce, culture, education, tourism and other fields.

He emphasized that Greece disagrees with the opinion that CEECs-China cooperation will divide Europe, and it will remain committed to such cooperation and play a positive role in promoting the overall EU-China relationship.

He added that he is confident that President Xi's visit will achieve fruitful results and become a new important milestone in the development of Greece-China and EU-China relations.

After the talks, the two leaders met journalists and attended a ceremony for the exchange of bilateral cooperation documents covering investment, port, finance, energy, education and other fields.

The two sides issued a joint statement on strengthening their comprehensive strategic partnership.

Greece is the first stop of Xi's ongoing Europe and Latin America tour, which will also take him to Brazil. He will attend the 11th BRICS summit to be held in Brasilia on Nov. 13-14.