After leaving Afghanistan and Iraq, Ali hopes that the US will finally realize its mistake: Sending troops to other country's territory is never the answer. "There are certain ways to fight terrorism
.

20 years on, memories of the 9/11 calamity still haunt the Americans.

"It was just a surreal moment," Richard Dixon recalled "the smoke, the heat, the ash, the dust" at World Trade Center on the morning of September 11, 2001. He was a cop with the New York Police Department and was dispatched there to aid in rescue. "You're just looking for survivors and none were coming."

Starting from 8:46 AM, 19 al-Qaeda terrorists crashed 4 planes on US territory, causing the collapse of the twin towers, its surrounding buildings, and the west side of the Pentagon. A total of 2,977 people were killed, including Brett Eagleson's father Bruce Eagleson, who survived both of the initial crashes into the twin towers, but died in the collapse. 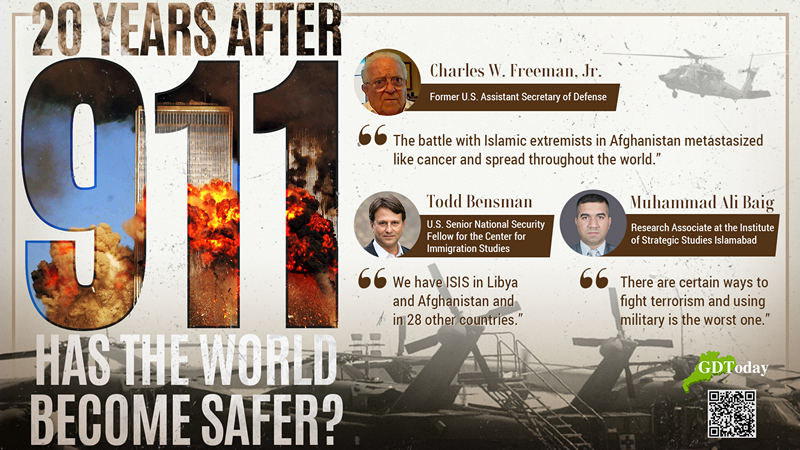 War on Terror makes the US safer, but spread terror worldwide

Enraged and humiliated by the attacks, the US took revenge on the terrorists by launching the War on Terror, which has led to a 20-year war in Afghanistan, a constant conflict in Iraq since 2003, and the worldwide assassinations of targeted terrorists.

Todd Bensman, the Texas-based Senior National Security Fellow for the Center for Immigration Studies and also the author of America's Covert Border War, thinks highly of the US' 20-year counter-terrorism efforts. “For 20 years, we prevented the territory of Afghanistan from becoming a launching pad of attacks against the American homeland" and "we haven't had an attack as big as 9/11" since then.

When the War on Terror insulates the US from massive terrorist attacks, the terror, however, has not been eliminated but metastasized to a broader range of regions.

"There are now almost 80 countries in which the American military are engaged in some sort of counter-terrorist warfare," former US Assistant Secretary of Defense Charles W. Freeman, Jr. pinpointed.

Muhammad Ali Baig, a Research Associate at the Institute of Strategic Studies Islamabad, referred the circumstances in Pakistan as an example of this "spillover effect" caused by the US' counter-terrorism measures.

According to Todd, terrorist groups such as ISIS and their branches have proliferated across the world in the past two decades. "You have ISIS may be militarily defeated in Syria and Iraq, but they’re in Libya, Afghanistan, Indonesia, and in 28 other countries."

Invasion is not the solution to terrorism

On the eve of the 20th anniversary of 9/11 terrorist attacks, the US completed its withdrawal from Afghanistan, declaring the end of its longest war. By the end of this year, it is also going to end its combat mission in Iraq.

The Afghans are "the ones who are going to decide their own future as they should, which is again why, I think, we should have called it quits when we accomplished our initial purposes," Charles said when he commented on the US' "invasion" into Afghanistan.

The US has made some achievements in Afghanistan, as agreed by both Charles and Todd, such as empowering women and introducing "more modern forms of government governance", but "these accomplishments are all about to vanish."

Why did the US' nation-building fail in Afghanistan and Iraq? Ali attributes this failure to the US' exceptionalism and ignorance of cultural diversity, which is to think that it is "their divine duty to civilize the people of the world" and "every society is just like them".

After leaving Afghanistan and Iraq, Ali hopes that the US will finally realize its mistake: Sending troops to other country's territory is never the answer. "There are certain ways to fight terrorism and using military is perhaps the worst one."

There is still a long way to go before rooting out terrorism. "All nations of the earth should band together against this scourge,” Todd calls for international cooperation to fight against terrorism.

In the meantime, Charles is worrying about the discord among major countries. "How do we put together a strategy if we can't talk to each other?" He, therefore, suggested that "particularly the neighboring countries, which includes China, should make a serious effort to work with everyone else, including the United States, to craft a strategy for bringing peace to Afghanistan" in a bid to prevent it from being a safe haven to terrorists.

The US has spent 20 years in a mire of war and struggle against terrorism, but has the world become safer?

Brett is still unsettled by the death of his father and continuing to look into information that will bring the covert sponsor of the 9/11 attacks to light. "There are still so many unanswered questions," said Brett. "We deserve justice, we deserve closure."