On September 8, the inauguration ceremony of the honorary academic and the awarding of the Michelangelo International Prize for Guangdong artist Liu Youju took place at the Accademia delle Arti del Di

On September 8, the inauguration ceremony of the honorary academic and the awarding of the Michelangelo Medal for Guangdong artist Liu Youju took place at the Accademia delle Arti del Disegno, or the Academy of Drawing Art, in Florence, Italy. 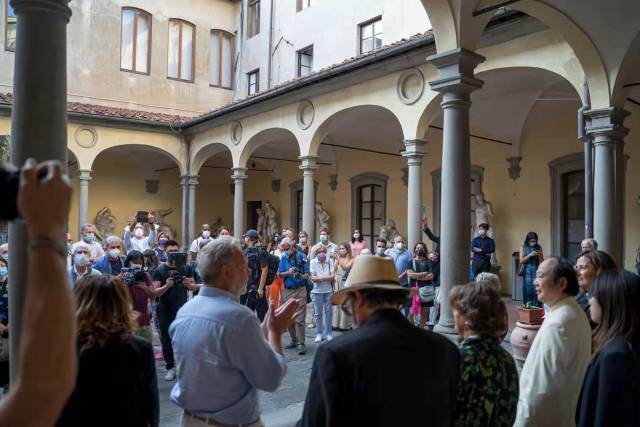 Actually, it was in July 2019 that Liu Youju was nominated as an honorary member of Italy's Academy of Drawing Art and last year that he was awarded the Michelangelo Medal. But due to the recurrence of the COVID-19 pandemic, both the inauguration and award ceremony were postponed till now.

The day before, the opening ceremony of Liu's solo exhibition was staged at the outdoor lobby of the Academy of Fine Arts of Florence.

"This is the first high-standard international art exhibition held by our institute since the outbreak of the pandemic," said Andrea Granchi, President of the painting class of the Academy of Drawing Art.

About the Michelangelo Medal

The Michelangelo Medal is awarded to artists worldwide who have made important contributions to the arts of painting, architecture and sculpture as well as art theory, according to Anna Balzani, chairman of the Italian Association of Contemporary Artists and the Honorary Academic of the Academy of Drawing Art in Florence. It is one of the most prestigious art awards presented in Florence and highly recognized by the academic world.

Liu Youju, China's famous calligrapher, avant-garde painter and founder of illusionist painting, was born in Jieyang, a city in eastern Guangdong in 1955. Liu has been engaged in illusionist painting for years, and is an expert at using colors and creating mysterious spaces, leaving a lot of room for the audience's imagination.