Harmony and stability are in HK people’s best interests

Social harmony and stability have been crucial to sustaining social development and economic vitality in the Hong Kong Special Administrative Region (HKSAR), and is also within the fundamental interes 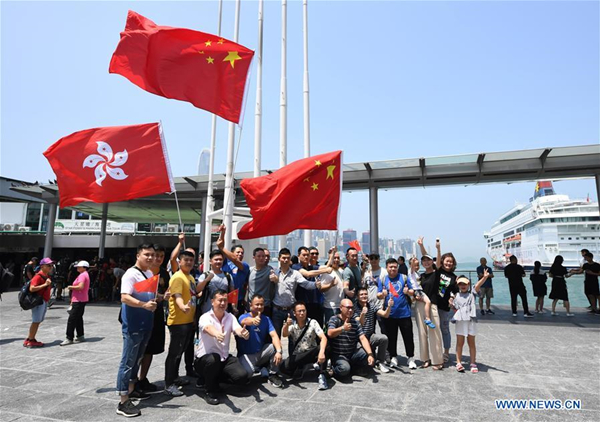 Social harmony and stability have been crucial to sustaining social development and economic vitality in the Hong Kong Special Administrative Region (HKSAR), and is also within the fundamental interests of HKSAR.

However, protests in Hong Kong, which have continued for over two months, have severely impacted the region's prosperity and stability, as well as Hong Kong people’s livelihood, and are pushing the region into a "dangerous abyss".

From storming and vandalizing the Legislative Council (LegCo) building, to paralyzing transport networks and assaulting the police force with bricks and petrol bombs, protesters have gone far beyond the realm of peaceful demonstrations.

A small number of violent radicals are at the forefront together with some kind-hearted but misguided and coerced citizens who are caught in the middle. However, the masterminds behind the violence are anti-China forces from within and outside of Hong Kong.

Subversive forces have whitewashed and instigated violence, attempting to drag all Hong Kong residents into political turmoil and intensifying social chaos. To them, the well-being of Hong Kong's seven million people is a disposable pawn in their strategy.

A chaotic Hong Kong will do no one any good. Thus, it is the immediate task facing all Hong Kong residents to stop the violence and chaos and bring back order.

China's determination to safeguard sovereignty, security, and development interests, and to implement a "one country, two systems" for Hong Kong's prosperity and stability is unwavering.

Therefore, Hong Kong citizens should think carefully about who will suffer if the situation becomes irreconcilable, and who will benefit in the end? The fate of Hong Kong will ultimately be decided by all Chinese people including Hong Kong residents.

Edited by Wing, Olivia and Chris