Scientists have discovered that microglia are like the janitors of the brain, cleaning up after the mess that neurons make and clearing away dying cells. This will change the neural connections in the

Do you know how intangible memories are being "eaten" by tangible cells? Lin Yuchen, a research assistant from the Shenzhen Institute of Advanced Technology, Chinese Academy of Sciences, shared this with the audience at a science popularization competition held in Guangzhou on July 30, 2021. 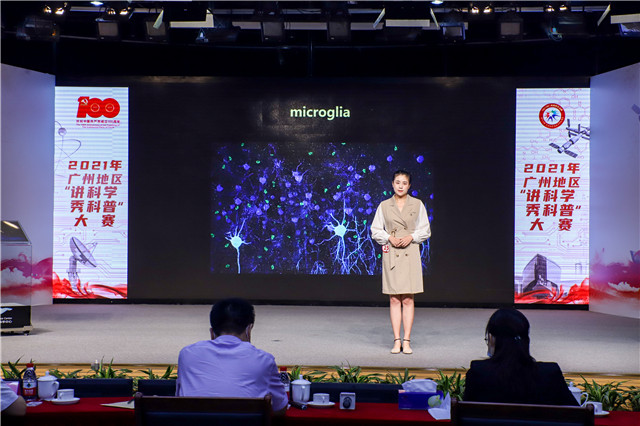 Lin Yuchen attends the contest at the Guangdong Science Center in Guangzhou on July 30, 2021. (Photo provided to Newsgd.com)

Lin Yuchen said that human's non-declarative memories—memory of sensation and movement—are stored in simple neural connections—synapses. Scientists have discovered that microglia are like the janitors of the brain, cleaning up after the mess that neurons make and clearing away dying cells. This will change the neural connections in the hippocampus by "eating off" old memories and helping form new ones.

A regional science competition featuring the scientific development in China over the past century came to an end at the Guangdong Science Center. 139 contestants competed to demonstrate their science popularization skills. They explained the obscure scientific principles with the help of humorous language, experimental props or multimedia video and animation, so that the knowledge can be easier to understand.

"Speaking of toothwash, it refers to remove the dental calculus. Toothwash can prevent the coagulation of dental calculus, restores the original appearance and color of the teeth. Therefore, it is very important to have a regular dental cleaning once a year," said Wu Qianyi, a student from Sun Yat-sen University at the competition. 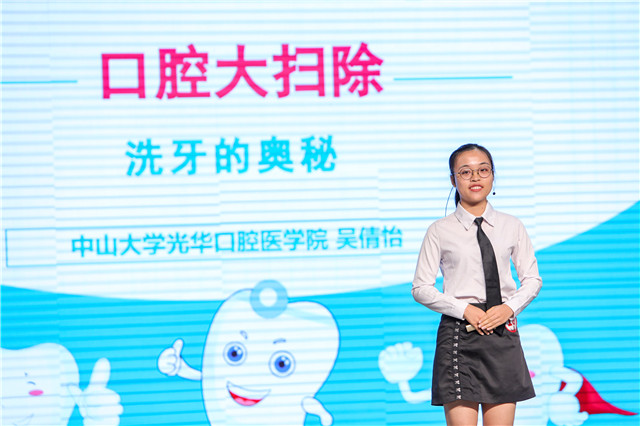 Wu Qianyi attends the contest at the Guangdong Science Center in Guangzhou on July 30, 2021. (Photo provided to Newsgd.com)

"Do not drink too hot boiling water, since it will damage the structure of the esophagus and lead to the nasopharyngeal carcinoma and esophageal cancers," explained Yu Xinyi, an interpreter from Southern Medical University Museum of Human Science, "As long as the water is not too acidic or alkaline, it does not have much impact on the body."

Yu Xinyi attends the contest at the Guangdong Science Center in Guangzhou on July 30, 2021. (Photo provided to Newsgd.com)

Interestingly, Chinese drink boiled water not only when they feel sick, but even during summer almost every day. Why are Chinese devoted boiled water drinkers? Actually, Chinese drank ice water in the ancient times, but since microbiology was introduced to China from Western countries and Japan over 100 years ago, the government felt obliged to advise people to drink boiled water to avoid unnecessary diseases.

It became more common to see people drink boiled water after 1949 when the People's Republic of China was founded. In rural areas, boiled water was supplied in public canteens for a short time (1958-1960), as a result of the decline of malaria and diarrhea. Though the advice was later withdrawn, the idea of drinking boiled water was deeply ingrained in people's minds. Now boiled water is China's go-to beverage.

In addition to the above-mentioned topics, the participants shared a wide range of scientific knowledge, including medical contents such as stem cells, and coronary heart disease, which are closely related to human health. Some contestants gave their audience fascinating insights into cutting-edge technologies such as aerospace, aviation and meteorological satellites. Several hot issues such as new energy and carbon neutrality were also demonstrated during the competition.

Since 2012, the competition has been held for ten consecutive years. It aims to mobilize the enthusiasm of scientific and technological enthusiasts from all walks of life to participate in science popularization and spread scientific knowledge methods.