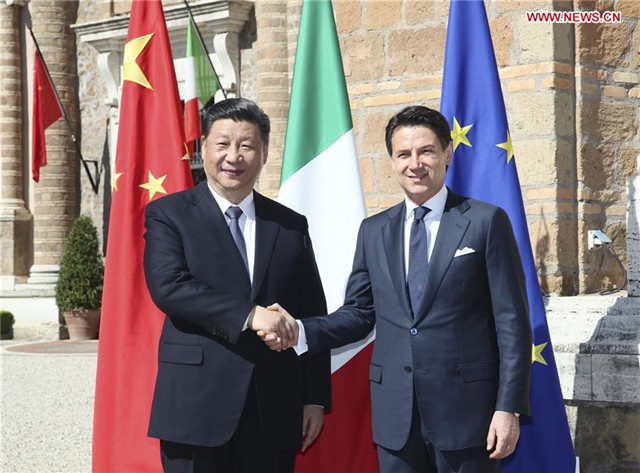 Chinese President Xi Jinping and Italian Prime Minister Giuseppe Conte held talks here Saturday on jointly elevating the China-Italy relations into a new era and witnessed the signing of a memorandum of understanding (MoU) to advance the construction of the Belt and Road.

During their talks, Xi noted that the China-Italy relations are rooted in the history of the two countries' thousand-year-old exchanges, with strong public support.

In recent years, the two countries have continuously deepened their communication and cooperation in various fields, which helped each other's social and economic development, Xi said.

Calling China and Italy important strategic partners to each other, Xi urged both sides to view and handle the bilateral ties from a strategic height with long-term perspective.

The two countries should take the opportunities of the 15th anniversary of the China-Italy comprehensive strategic partnership this year and the 50th anniversary of China-Italy diplomatic relations next year to jointly elevate bilateral relations into a new era, and allow their practical cooperation fruits in various fields better serve the two peoples, Xi said.

With similar development goals, China and Italy have strong complementarity in economy and bright prospect of cooperation, the Chinese president said.

China is willing to work with the Italian side to comprehensively expand and deepen bilateral ties, he said.

Xi encouraged China and Italy to enhance top-level design, consolidate political basis, promote high-level exchanges, increase dialogue between various departments and on all levels, and continue to render mutual understanding and support on issues of each other's core interests and major concern.

China and Italy were at the two ends of the ancient Silk Road, thus they have every reason to carry out cooperation on the Belt and Road, Xi said. "We adhere to the principles of extensive consultation, joint contribution and shared benefits, follow the principle of transparency and openness, and aim for cooperation of win-win results."

He urged the two countries to take the opportunity of the inking of the intergovernmental MoU on jointly building the Belt and Road to strengthen the alignment of the Belt and Road Initiative (BRI) with Italy's plan to develop its northern ports and the InvestItalia program, and promote mutually beneficial cooperation in all fields.

The two countries should increase convergence of interests, optimize and upgrade their cooperation, and achieve more early results in priority areas such as space technology, infrastructure construction, transport, environment and energy, Xi said.

China and Italy should also strengthen communication and coordination on macroeconomic policy and jointly push forward third-market cooperation in such fields as energy, finance and infrastructure construction, he said.

Xi urged the two countries to take the opportunity of the culture and tourism year, to be held in each other's country in 2020, to forge friendly bonds of their world heritage sites and increase exchanges and cooperation between their museums, at local levels, and in sports and other sectors.

China and Italy should also join hands in advocating trade and investment liberalization and facilitation, continue to strengthen communication on major issues such as the United Nations affairs, WTO reform, climate change and global governance, and safeguard multilateralism together, he said.

The Chinese president noted that China sticks to further opening up and welcomes Italian and other countries' enterprises to invest and start business in China.

"We also encourage Chinese enterprises, especially high-tech companies, to invest and develop in Italy, and regard Italy as an important partner in cooperation on science and technology innovation," Xi told Conte.

The Chinese government has always encouraged Chinese enterprises to conduct overseas cooperation according to business principles and international rules, and on the basis of abiding by local laws, Xi said, urging the Italian government to continue to provide good business environment for Chinese investors.

Calling China and the European Union (EU) constructors of world peace, contributors to global development and protectors of international order, Xi said the two sides should follow the trend of the times featuring a world of multi-polarization and economic globalization, and push for the construction of an open world economy.

He urged the two sides to accelerate the negotiations on a China-EU investment agreement, enhance the synergy of the BRI and the EU's development strategies, and boost communication and coordination on major international and regional issues.

Xi said he hopes that the Italian side would continue to play an active role in deepening China-EU dialogue and cooperation in all fields and promote independent and stable development of China-EU ties.

For his part, Conte said Xi's visit to Italy bears historic significance and will lead the Italy-China relations to a higher level.

Noting that the two countries have a thousand-year-old history of exchanges, the Italian prime minister said the two ancient civilizations have interwoven with each other, with long-standing exchanges in economy, trade and culture, which served as an important foundation for the long-term development of their friendly cooperation.

Italy attaches great importance to its relations with China, and is willing to deepen the Italy-China comprehensive strategic partnership and expand cooperation in such fields as economy, trade, energy, agriculture, culture, tourism and aviation, on the occasion of the upcoming 50th anniversary of their diplomatic ties, Conte said.

With a special geographical advantage in building connectivity, Italy is glad to seize the historic opportunity in joining the Belt and Road construction, Conte said, adding that he strongly believes that it will help fully explore the potential of Italy-China cooperation.

The prime minister said he is looking forward to attending the second Belt and Road Forum for International Cooperation, adding that Italy welcomes Chinese enterprises to invest in Italy and realize mutual benefit and win-win outcomes.

Italy stands firm in supporting multilateralism and free trade, and ready to closely communicate and coordinate with China so as to promote healthy and stable development of EU-China ties, he said.

After their talks, the two leaders witnessed the signing of multiple bilateral cooperation documents, including the MoU on jointly advancing the construction of the Belt and Road, and the document on the return of Chinese relics confiscated by Italy. They also paid a visit together to see the Chinese relics.

Xi arrived in Rome Thursday for a state visit to Italy, the first stop of his three-nation Europe tour, which will also take him to Monaco and France.