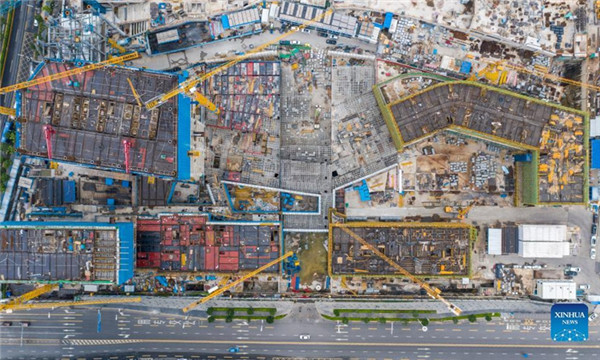 During the inspection, Han visited Qianhai Mercantile Exchange of Hong Kong Exchanges and Clearing to learn more about trading varieties and market trends, as well as promoting the construction of commodity spot trading platforms.

Han added that Qianhai should strengthen cooperation between Shenzhen and the Hong Kong Special Administrative Region, with the use of Hong Kong's modern services industry development advantages, in order to deepen opening up to a new high.

During Han's visit to the Shenzhen Qianhai Cooperation Zone People's Court, he pointed out that the zone should accelerate the alignment of legal rules and mechanisms with the Guangdong-Hong Kong-Macao Greater Bay Area and cultivate professional talent, especially young talent.

Moreover, Qianhai should build international legal service centers and international commercial dispute resolution centers together with Hong Kong, so as to provide strong institutional guarantees for the development of the Greater Bay Area, Han added.

Cong Yi, a professor at the Tianjin University of Finance and Economics, told the Global Times on Tuesday that the inspection tour shows that the central government will give Qianhai greater policy autonomy with a higher level of opening-up, which will lead to better alignment with the inherent requirements of international rules.

Such a legal environment that aligns with international standards will pave the way for the country's joining of the Comprehensive and Progressive Agreement for Trans-Pacific Partnership, Cong said.

Cong suggested that the government will further optimize the business environment of the cooperation zone in accordance with international rules, and facilitate investment and trade in pilot free trade zones.

During the inspection, Han also visited some private enterprises including Shenzhen-based Huawei Technologies Co and Mindary to examine the operation of these firms, including independent innovation and market development.

According to Han, China's private enterprises have flourished, and become full of vitality and vigor, since the policy of reform and opening-up, and they have become an important source of scientific and technological innovation.

Han's visit shows that the central government will continue to support firms to achieve autonomy in certain key technologies and devices, thus realizing original and independent innovation amid a heated technology war between China and the US, analysts said.

After a year of a US ban on access to key semiconductor supplies, Huawei is ramping up its own efforts to manufacture chips, and its ambition is far more than the 28-nanometer chipset, industry players told the Global Times.

Han also noted that China will build an ecosystem for the creation, protection and application of intellectual property rights, when he visited the China (Shenzhen) Intellectual Property Protection Center.

According to a report released by the World Intellectual Property Organization on Monday, China ranks 12th in the Global Innovation Index of 2021, up two places compared with 2020. The report showed that China's ranking has risen annually since 2013, with strong upward momentum.