Stephen Perry highly praised the strategic vision of the Communist Party of China (CPC) in its long-term exploration of China's development path. He firmly believed that CPC's wisdom in governing the

Stephen Perry, the winner of the China Reform Friendship Medal and the chairman of the 48 British Group Club, has long been committed to promoting Sino-British trade relations. In the 1950s, when the Western world imposed an economic blockade on China, his father led a British company delegation, "Icebreakers," to visit China. Stephen Perry inherited his father's business and became a recognized "Knowing China" person in the UK.

Recently, Stephen Perry granted an exclusive interview to the Nanfang Daily. He highly praised the strategic vision of the Communist Party of China (CPC) in its long-term exploration of China's development path. He firmly believed that CPC's wisdom in governing the country would burst out in the future with more vitality. It is also expected that China's development will bring new opportunities to the world and provide more Chinese solutions to achieve inclusive growth. 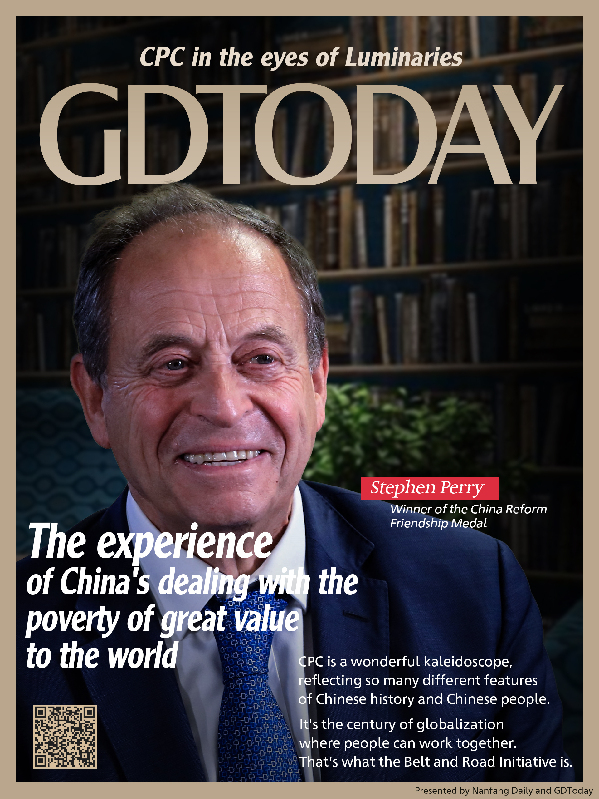 Nanfang Daily: How do you comment on changes in China these years?

Stephen Perry: I first went to China in 1972. That's almost 50 years ago. When the plane landed at the airport, right next to the runway, there were the fields of crops. Right up to the edge of the road were also crops. And everywhere you look were peasants with their straw hats, working very hard.

Enormous changes have taken place in China. Now China sells everything right up the market. And it is the best example in the world of a high-speed train network, which is lovely and comfortable.

Nanfang Daily: What’s your opinion on CPC’s efforts on the changes?

Stephen Perry: CPC is a wonderful kaleidoscope, reflecting so many different features of Chinese history and Chinese people. Without CPC, China would not be what it is today. Without the people of China, CPC would not be able to do its work.

CPC always hears the Chinese people when dealing with significant challenges. It is really among the people of China, have a clear vision of where they want China to go and are always prepared to adapt the vision to the realities of the world and the realities of China.

Nanfang Daily: How do you comment on China’s poverty reduction?

Stephen Perry: When it comes to poverty reduction, CPC was born to govern because it identified with the peasantry. It has also recognized that China couldn't modernize while 90% of the population were peasants. It had to become a country with large manufacturing industry and an even larger service industry. Now CPC has made it.

What's the role of CPC during the process? It's about the scientific method. When it comes to policy-making, CPC processes are a kind of scientific method of continually preparing policies and testing policies in certain places until it comes to the certainty that the situation would be right with the policies. Then China would experiment more dynamically on the policies.

The experience of China's dealing with poverty will be of great value to people worldwide.

Nanfang Daily: What do you think of China’s efforts on multilateral multiculturalism?

Stephen Perry: I think we're on a journey to trans-nationalism, where the country is sovereign, but the economic forces are transnational. It's the century of globalization where people can work together. The visions are global cooperation, security, and health.

That's what the Belt and Road Initiative is. It means trades are running across countries. They're not just built for China, but to run across several different countries, including countries in western Europe.