20 years after 9/11, there is still a long way to go to eradicate terrorism from the world, Jiang Jianguo, vice minister of the Publicity Department of the Communist Party of China (CPC), said at an international seminar on counter-terrorism, de-radicalization and human rights protection.

20 years after 9/11, there is still a long way to go to eradicate terrorism from the world, Jiang Jianguo, vice minister of the Publicity Department of the Communist Party of China (CPC) Central Committee, said at an international seminar on counter-terrorism, de-radicalization and human rights protection.

Besides non-governmental terrorism, there has also been “state terrorism” “in the form of indiscriminate drone attacks, which have notoriously killed a disproportionate number of civilians, as well as the use of chemical weapons”, Alfred de Zayas, former senior human rights expert at the United Nations, pointed out at the seminar. 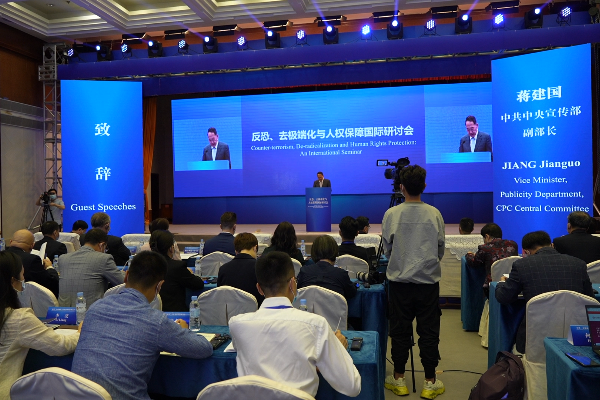 In terms of the genocide allegation, of which certain western countries keep accusing China, William A. Schabas, Professor of International Law at Middlesex University, London, criticized it for being misleading.

“The US Department of State reports have no assistance at all. In its introduction and in the executive summary, it alleges that the genocide is being committed. However, nowhere does it attempt to explain the legal or factual basis for such a claim,” Schabas referred to the US’ investigation as an example. “This may be enough to convince parliamentarians and diplomats in the West who seek opportunities to stigmatize China, but it could never ever succeed in the court of law.”

For the past 20 years, terrorism has posed an unprecedented threat to the world, while counter-terrorism efforts and human rights issues are being politicized, weaponized, and used as tools to interfere in the internal affairs and violate the sovereignty of other countries, the experts indicated.

No single mode can be applied to all the battlefields of counter-terrorism, Chen said. Weaponizing such issues will only cause more turmoil and tragedies at this turbulent time.

Approaches to eradicate terrorism and radicalization

“We cannot defeat terrorism merely by brute force,” de Zayas emphasized. “If we want to do away with terror, one way to combat it is to achieve the 17 sustainable development goals, including the eradication of poverty worldwide. If wealth and imbalances are reduced domestically and internationally, there will be less grounds for terror.”

Jiang believes that education, poverty eradication as well as sustainable social and economic development can alleviate terrorism. He also calls for educating and rescuing those poisoned by extremism.

Jiang further suggested that counter-terrorism and de-radicalization should be in accordance with the law and guided by the tenet and principle of the United Nations.

Now, through unremitting efforts and decisive measures in compliance with the law, no terrorist attack has been seen in Xinjiang for four consecutive years. “The infiltration of extremism in Xinjiang has been curbed, public security has improved, and people are living happy and peaceful lives,” Jiang added.

The seminar was co-sponsored by the China Society for Human Rights Studies and the Information Office of the People’s Government of Guangdong province, covering topics of rights protection and media responsibility in counter-terrorism and de-radicalization.

About 60 Chinese and 40 foreign participants attended the seminar in Guangzhou or online.