An event entitled "A date with Nanyue Housecraft to celebrate Chongyang Festival" was held at the household service station on Dongjiao Street, Liwan District, Guangzhou on October 13, just one day ahead of the festival, also known as the Double Ninth Festival, a day to pay respect to seniors in China.

An event entitled "A date with Nanyue Housecraft to celebrate Chongyang Festival" was held at the household service station on Dongjiao Street, Liwan District, Guangzhou on October 13, just one day ahead of the festival, also known as the Double Ninth Festival, a day to pay respect to seniors in China. 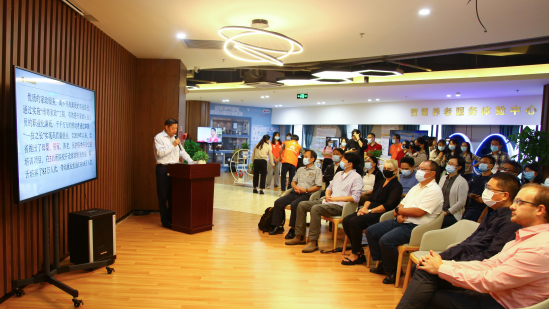 Expats from eight countries including Geuntae Park from South Korea participated in the event to tour the service station and share their insights on how to improve the housecraft services for expats in Guangzhou.

During the tour, staff members gave a detailed introduction of the abundant services available at the service station, including elderly care, maternal-newborn nursing, medical care, and home care. Expats experienced some nursing facilities as well as traditional Chinese medicine therapy and were impressed by the full-feature services station. 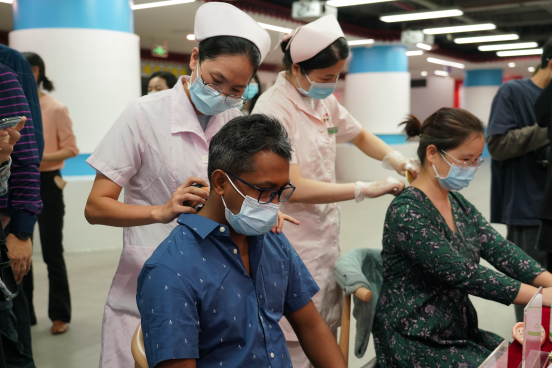 According to the person in charge, this kind of household service station integrates homemaking, elderly care, medical care, employment training and other services into the community. Residents can either come to the station to enjoy the services or place an order via its online platform for on-site services.

"This is very nice, I really recommend everybody to try this," said Mr. Geuntae Park, associate professor from the School of Art and Design of Guangdong University of Technology after he tried tui na or Chinese therapeutic massage during the event. Speaking highly of Chinese therapeutic massage service, Mr. Park also asked the staff where he could enjoy this service besides the service station in the city.

Mori Hirotada, a Japanese scientist from the Institute of Animal Science, Guangdong Academy of Agricultural Sciences, also said that he was interested in the medical care service and might try it again in the future.

Roni Bhowmik from Bangladesh told us that he was amazed by the up-to-date nursing beds presented at the service station, and he said the bed was perfect for his mother who has some trouble with the lower part of her body.

Matthew Bunney, from the US and deputy curator of Guangzhou Oriental Museum, was impressed by the nursing training of the station. "I just saw that nursing staff are trained in English here at the station. I think this kind of service can better help foreign talent take good care of their parents and children in China and solve their worries."

In addition, some expats suggested that the household service station should enhance its publicity, especially to foreigners. "We didn't know of such stations at all until we were invited here, and I think more efforts should be made to publicize it," said Vakulishyna Victoria from Ukraine, chorus conducting expert from the Xinghai Conservatory of Music.

ROBSON TSEU, aircraft maintenance engineer of China Southern Airlines, agreed with that too. He told us that foreign talent would trustingly settle down in China with their parents and children if they knew this kind of service was available to them before, and he believes that it's important to introduce the household service station to foreigners in English.

"China is now more international, especially Guangzhou and Guangdong province, so if there is a bilingual mode it will be good for foreigners," Roni added.

What's more, Kizito Tekwa from Canada, Instructor of the Guangdong University of Foreign Studies, pointed out that the government could give the elderly from abroad some training courses to get them used to this kind of service featuring a high level of science and technology.

Relevant people in charge of the affairs from local government departments attended the event and responded to the suggestions offered by the participants. About the "Nanyue Housecraft" program

Since 2018, Guangdong has made tremendous efforts to promote the top three livelihood programs: "Cantonese Chef", "Guangdong Technician" and "Nanyue Housecraft". The "Nanyue Housecraft" program aims to establish a routinized, standardized, specialized and brand-oriented housecraft service system with government guidance and market participation, so as to provide high-quality services which are more convenient, reliable and customized to the public.

The Dongjiao household service station is one of the demonstration centers showing how "Nanyue Housecraft" program serves the community. Now there are nearly 200 such service centers in the province. It is expected that by 2022, there will be 1,000 primary service centers set up in Guangdong, covering all the well-facilitated communities, delivering caring services for the aged and the young right to their door.