Get the ultimate travel experience with a culture and tourism passport

The Guangdong Culture and Tourism Passport was officially released at the Guangdong Museum in Guangzhou on December 30th, 2019.

How do you usually record the places you have visited in Guangdong? Now you have one more interesting way to keep track of the tourist attractions you have been to. The Guangdong Culture and Tourism Passport was officially released at the Guangdong Museum in Guangzhou on December 30th, 2019.

The 30-page passport is a way for you to collect commemorative stamps and win commemorative badges from each scenic spot you have visited. It features ten famous tourist destinations in Guangzhou including the Canton Tower and the Chen Clan’s Academy.

The passport is embedded with an RFID chip and can be identified by the specific automatic stamping machine. Before you get the stamp, you will also be able to play a game on the theme of culture and tourism on the machine in both Guangdong Museum and Canton Tower.

According to an official from the Department of Culture and Tourism of Guangdong Province, more tourist attractions will be added into the passport in the near future.

The passport is now available for free before January 7th at the following ten scenic spots in Guangzhou. There are only a limited number of free passports. First come, first serve. Don’t miss out. 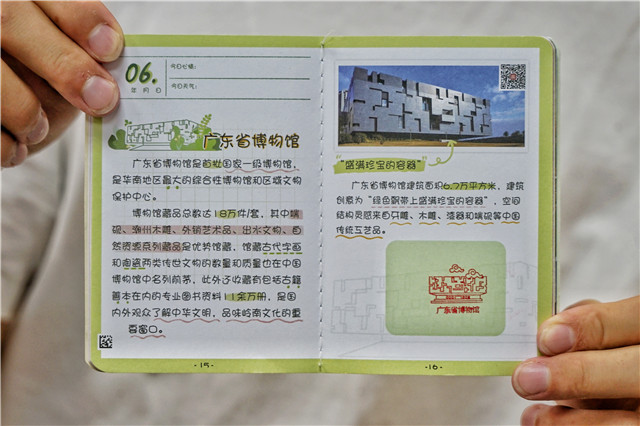 10. The Museum of Site of the 3rd National Congress of the Communist Party of China (中共三大会址纪念馆)

The passport and the emblems. [Photo: Zhang Di/Nanfang Daily]

1. Visit one of the above-mentioned scenic spots, collect a stamp and get one limited-edition emblem via a random drawing.

2. Exchange emblems with other passport holders, the aim is to get a set of ten different emblems.

3. After you have collected 10 stamps and 10 different emblems, go get the ‘ultimate stamp’ and the ‘ultimate emblem’ at any of the scenic spots, then you will get a gift box for your passport and emblems.

4. You will also find some discount coupons in the passport that you can use in some of the attractions.