Mainstream media groups from around the world have been invited to tour Guangdong. They will visit Foshan, Jiangmen, Zhuhai and other cities to witness firsthand the achievements of 40 years of reform

Mainstream media groups from around the world have been invited to tour Guangdong. They will visit Foshan, Jiangmen, Zhuhai and other cities to witness firsthand the achievements of 40 years of reform and opening up in Guangdong. 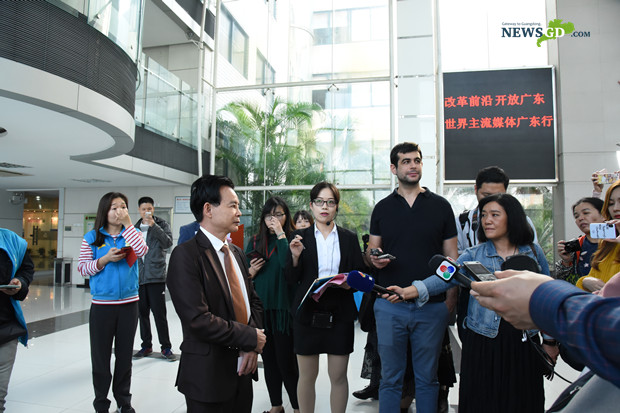 The foreign media will gain a greater understanding of Guangdong's implementation of national strategy regarding the Bay Area, and the development of free trade, financial services, high-end manufacturing, and technological innovation in the region.

Guangdong has always been at the forefront of China's advanced production efforts and cultural opening up. During the past 40 years of reform and opening up, the GDP of Guangdong has increased from 18.5 billion yuan in 1978 to 8.9 trillion yuan in 2017, ranking first nationwide for 29 consecutive years. The total volume of foreign trade import and export has been the highest across China for 32 consecutive years, accounting for nearly one quarter of the country's total.

On the afternoon of the 26th, overseas media groups visited CHIGO Air Conditioning, which was established in 1994. The company’s annual output value is now nearly 20 billion RMB. Li Xinghao, the President of CHIGO Air Conditioning, echos the sentiments of many; “China’s reform and opening-up in 1978 brought new growth for economy. It brought lots of opportunities for start-up businesses. From 1998, CHIGO started to expand its overseas market. CHIGO air-conditioning was introduced to Europe, and soon appeared in more than 120 countries and regions, including the Middle East, Southeast Asia, Africa, and America.”

After the visit to Chigo air-conditioning, foreign media were impressed by the achievements of this private enterprise, "I feel that reform and opening up have brought many opportunities for the development of Guangdong. This achievement serves also as a valuable example for the whole of China," said by Oihyum Kim from Hankyoreh Media.

The Portuguese news agency reporter Pimenta Joao agreed to an interview with Newsgd.com. He said that he is looking forward to visiting the Hong Kong-Zhuhai-Macao Bridge.

"Our country’s readers are most interested in the world's longest bridge. As a Portuguese correspondent in China, I’m looking forward to seeing it." In addition, he also expressed his hope to have in-depth discussion with government members across Guangdong. “Everyone is talking about the Guangdong, Hong Kong and Macau Greater Bay Area, and our company also has a branch in Macau. So I want to know what the future of the Greater Bay Area will look like. For example, Will it be similar to the Schengen area? If Hong Kong or Macao products enter the Mainland or enter Hong Kong and Macao from the Mainland, will it be tax-free? Will people flow freely? This is what we want to know most."