The anti-poverty story between Dingzhen's hometown and Guangdong

Under the guidance of China's poverty alleviation cooperation policies between eastern and western regions, Guangdong province has been helping Dingzhen's hometown, Ganzi prefecture, to overcome pover

A young Tibetan herdsman, whose name transliterates as Dingzhen in Mandarin, has become a national heartthrob in China after millions of netizens became fans of his "clean eyes and pure smile."

About two weeks ago, a photographer went to Litang, a remote county in Ganzi Tibetan Autonomous Prefecture of Sichuan province, to take some pictures, and he accidentally shot a video of Dingzhen. In the video, Dingzhen was captured walking in front of his home and smiling shyly towards the camera.

The photographer posted the video on Douyin, and it soon went viral, garnering over two million likes and more than 100,000 comments. Some netizens commented that "the young man's eyes are full of stars and are as pure as the blue sky behind him". They even coined a new word for Dingzhen—Sweet Wild Boy, which means a boy with both sweet and wild looks.

After becoming an internet sensation, Dingzhen served as the local tourism ambassador and shot a promotional film "The World of Dingzhen" to speak for his hometown of Ganzi Prefecture. The film brought Ganzi, a beautiful and mysterious wonderland, into people's vision.

In fact, under the guidance of China's poverty alleviation cooperation policies between eastern and western regions, Guangdong province has been helping Ganzi prefecture to overcome poverty since 2014. In the past 7 years, Guangdong has invested about 2.396 billion yuan, implemented 275 projects, and raised nearly 205 million yuan of social donations to help Ganzi cultivate advantageous industries and improve local people’s living conditions and public services. It has made a huge contribution to the orderly lifting of 220,000 impoverished people in the prefecture.

With high altitude and sufficient sunlight, Ganzi has a favorable condition for the development of modern agriculture. In 2016, Zhuhai, Ganzi’s pairing assistance city, provided financial support to establish a modern agricultural park, Litang -Zhuhai Zhuosang Modern Agricultural Park, in Ganzi. In 2019, Zhuhai even built a "Tibetan Fruits and Vegetables" industrial base and a Yak breeding base in the park, and assisted Ganzi to enter the markets of Chengdu, Guangzhou, Zhuhai and other cities through sales platforms such as Hema Fresh and Ito Yokado, achieving an agricultural output value of more than 96 million yuan.

At present, the 1.58 million square meters of the agricultural park has become an important vegetable planting and processing export base to Guangdong, Hong Kong, Macao and Southeast Asia. The "Tibetan Fruits and Vegetables" have also become a new popular vegetable brand. Last year, 5,000 kilograms of plateau mushrooms produced in the park were directly supplied to Hong Kong and Macao at a price of 5 to 7.5 yuan per kilogram. In the future, more processing workshops and cold storages will be built to facilitate Ganzi’s transportation of plateau agricultural products to Zhuhai and the entire Guangdong-Hong Kong-Macao Greater Bay Area. 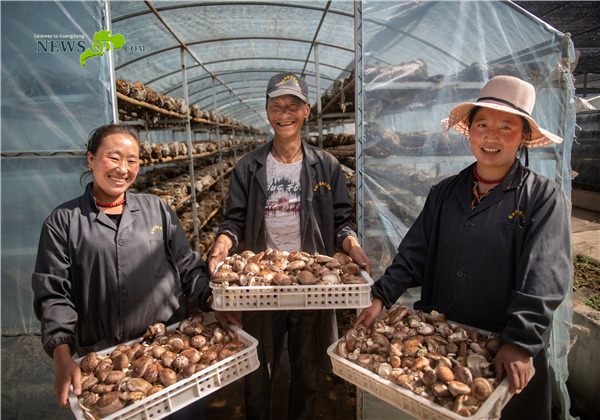 Many net users believe Dingzhen’s phenomenal popularity has great significance that goes beyond an internet sensation, as it sheds light on the efforts that Chinese government and rural officials have made to boost local tourism and fight poverty. Dingzhen’s instant fame not only changes his own life, but also brings opportunity to his hometown’s cultural and tourism development.

On July 14, China Southern Airlines officially opened a Zhuhai-Chongqing-Daocheng (珠海—重庆—稻城) round-trip route. This 2550-kilometer-long route, with an altitude difference of 4,400 meters between departure airport and destination airport, builds a convenient air bridge between the snow-covered plateau and the Pearl River Delta. Guangdong residents therefore can take this flight to conveniently admire Dingzhen’s hometown and explore China’s purest and the most mysterious Tibetan scenery.