Update | Guangzhou's confirmed case is of COVID-19 variant from India

On May 23rd, Guangdong reported three new asymptomatic cases of COVID-19, with one reported by Guangzhou and two by Shenzhen, respectively.

On May 23rd, Guangdong reported three new asymptomatic cases of COVID-19, with one reported by Guangzhou and two by Shenzhen, respectively.

Mr. Lu, the new identified asymptomatic patient, is the husband of Ms. Guo, who is the 75-years-old confirmed case of COVID-19 that had been reported in Liwan District, Guangzhou on May 21.

After epidemiological investigation, Mr. Lu had a basically same tracking with his wife and he has been transferred to the Guangzhou No. 8 People's Hospital for isolation and treatment.

According to the evaluation through testing and gene sequencing analysis by medical experts, Ms. Guo had contracted a mutated strain that had come from India, that is a confirmed case related to imported COVID-19 case.

As of 6 p.m., May 23rd, 128,072 nucleic acid test samples had been collected from key population in the patient's staying venues and 115,573 of those had been processed, all showed negative. 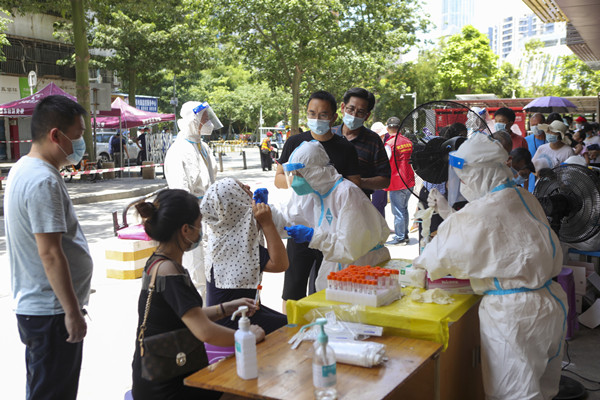 All four were aboard the same global freight ship on May 17th. They are currently in stable condition at Shenzhen No. 3 People's Hospital.

Based on the gene sequencing analysis and epidemiological investigation, it is speculated that the cases have the same source of infection or the same transmission chain, the information office said in a statement.

According to the gene sequencing analysis on nuclear acid tests of Mr. Xu and Mr. Mu who had been confirmed earlier, both show mutated strain that comes from UK.

The district is home to Yantian port, a major foreign-trade port in China, according to the report of Xinhua.