As of May 25th, Guangdong reported two new asymptomatic cases of COVID-19, with one reported by Maoming and one by Shenzhen, respectively. And an asymptomatic case reported in Nanning, Guangxi Zhuang autonomous region on May 24th was quarantined at a designated hotel in Guangzhou's Liwan District before.

On May 25th, Maoming city in western Guangdong has discovered one new asymptomatic case (Ms. Yao) of COVID-19 from the screening of close contacts of the confirmed case Ms. Guo found in Guangzhou on May 21st.

According to the notice, Ms. Yao is a waitress of Youyijian Dimsum & Tearoom in Guangzhou's Liwan District. Ms. Yao was one of the close contacts of Ms. Guo, and she had served dishes for Ms. Guo without wearing a mask during that period.

Ms. Yao has been in quarantine since May 22nd and now is taking treatment at Maoming People's Hospital. More information will be released in timely manner.

Mr. Ning is diagnosed as an asymptomatic carrier for COVID-19 and currently taking treatment at Nanning’s designated hospital.

Update on epidemic prevention and control in Guangzhou's Liwan

As of 5 p.m., May 24th, there were no new reported cases of COVID-19 in Liwan District, Guangzhou.

As for the confirmed case (Ms. Guo) and the asymptomatic case (Mr. Lu), both are under treatment at Guangzhou No. 8 People's Hospital.

As of 6pm. May 24th, 131,226 nucleic acid test samples had been collected from key population in the patient's residential and visited venues and 129,758 of those had been processed, all showed negative. No community transmission is discovered by now.

What’s more, Liwan District is taking the second round of nucleic acid test of residents who have been to the following venues from May 15th to May 21st. 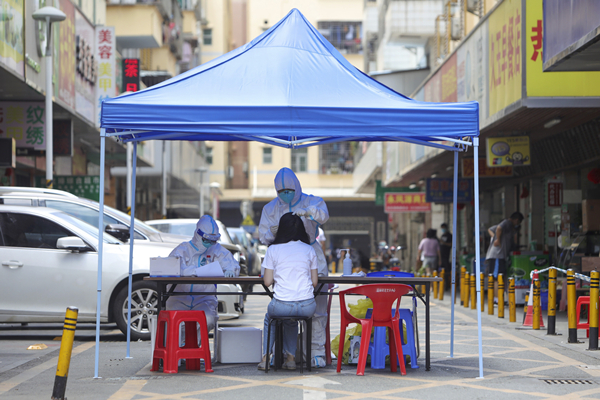 On May 24th, Shenzhen reported one new asymptomatic case of COVID-19. The infected person, Mr. Shi, was discovered in the second round of nucleic acid test of key personnel in Yantian District's port area on May 23rd.

Similarly, Mr. Shi together with the previous four asymptomatic cases, all had worked on the same global freight ship. He is currently in quarantine with medical treatment at Shenzhen No. 3 People's Hospital.

Also, the five people living with Mr. Shi have been quarantined, and their nucleic acid test results are all negative.

Updates on COVID-19 cases in Guangdong

On May 24th, Guangdong reported another eight imported asymptomatic cases. The cases, with seven reported by Guangzhou, came from Canada, Myanmar, Bangladesh, Mexico, Turkey and Cote d 'Ivoire, and one reported by Shenzhen, came from Hong Kong SAR.

As of midnight yesterday, Guangdong had reported a total of 2,412 cases, including 1,015 imported cases.

As of 9am, May 25th, there are no regions with high risk and 23 regions with moderate risk in China, including 1 in Guangzhou's Liwan, namely the Huixin Ge inJinlong Community, Longjin Street (广州市荔湾区龙津街锦龙汇鑫阁), 7 in Anhui province, and 15 in Liaoning province.