Opinion | The plans for Hengqin, Qianhai is to solve economic problems of Macao and Hong Kong: Chen Guanghan

What key information do these two plans reveal? What positive impacts will they bring to the Guangdong-Hong Kong-Macao Greater Bay Area?

The plans of Guangdong-Macao in-depth cooperation zone in Hengqin and the Qianhai Shenzhen-Hong Kong Modern Service Industry Cooperation Zone have always been regarded as a major arrangement of China to enrich the practice of "one country, two systems".

It is said that the cooperation zone in Hengqin will be an important driving force for Macao's long-term development. And at the same time, Qianhai will play an exemplary and leading role in the development of the Guangdong-Hong Kong-Macao Greater Bay Area. 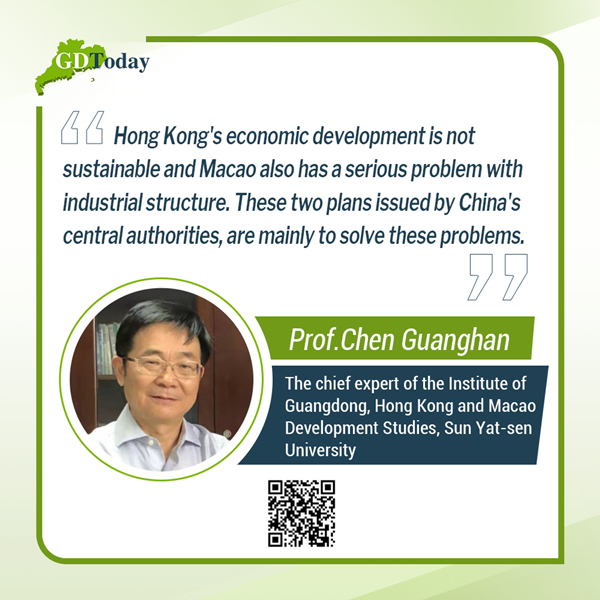 What key information do these two plans reveal? What positive impacts will they bring to the Guangdong-Hong Kong-Macao Greater Bay Area?

GDToday interviewed Professor Chen Guanghan, the chief expert of the Institute of Guangdong, Hong Kong and Macao Development Studies of Sun Yat-sen University. He shared some views about what these plans will bring to the Guangdong-Hong Kong-Macao Greater Bay Area.

GDToday: How will the two plans enrich the practice of "one country, two systems"?

New blood and fresh ideas should be introduced to invigorate both the economic developments of Hong Kong and Macao. In my opinion, the Development Plan for the Guangdong-Hong Kong-Macao Greater Bay Area, and especially these two plans issued by China's central authorities, are mainly to solve these problems.

GDToday: What do you think about the breakthrough of the plan for building a Guangdong-Macao in-depth cooperation zone in Hengqin?

Prof.Chen: The plan for Hengqin has some hard-hitting content. For example, declaration procedures for outbound and inbound goods between Macao and the cooperation zone will be further simplified. Inbound and outbound travel will also become highly convenient. It's a significant policy change.

In the plan, except for developing new industries, the cooperation zone will be constructed as a new home for Macao residents to live and work. It will surely be more integrated with Macao in many aspects, like legal system and infrastructure construction. It is indeed a new challenge. If it works out, the pattern of Hengqin could be promoted to Guangzhou and Shenzhen to promote further the integration of Guangdong, Hong Kong, and Macao. In this way, the plan sets the goal for the zone to fully demonstrate the strong vitality and strength of "one country, two systems."

GDToday: How do you understand the positioning and significance of the Qianhai Shenzhen-Hong Kong Modern Service Industry Cooperation Zone?

Prof.Chen: The construction of the Qianhai Shenzhen-Hong Kong Modern Service Industry Cooperation Zone is an important initiative to support Hong Kong's economic and social development, enhance the level of cooperation between Guangdong, Hong Kong, and Macao, and build a new pattern of opening up. According to the plan, Qianhai will advance the development of the modern service industry, promote free trade in services with Hong Kong and Macao, expand the opening-up of the financial sector, and promote high-level participation in international cooperation. In fact, all these actions help Hong Kong's economy better integrate into the overall development of our country.

In this sense, I think the future development of Qianhai has an all-around significance for China's reform. The plan was formulated to help Qianhai better play an exemplary and leading role in developing the Guangdong-Hong Kong-Macao Greater Bay Area. China's economic development has entered a new stage, in which the domestic economic cycle plays a leading role while the international economic cycle remains its extension and supplement. Therefore, except for supporting the development of Hong Kong, Qianhai serves as an explorer of China's reform and open up for a new development pattern.

GDToday: How would Qianhai Cooperation Zone stimulate the development of Hong Kong's science and technology industry?

Prof.Chen: Qianhai has two important strategic positions: a new experimental platform for comprehensively deepening reform and innovation, and the other is a high-level opening-up gateway hub.

From my point of view, the high-tech industry is promising to be the new driver of Hong Kong's economic growth. In that case, it is not enough to do some research and publish some papers in universities, whilst leaving the industrialization of scientific research achievements to only happen in cities in Guangdong.

Hong Kong-Shenzhen Innovation and Technology Park in Lok Ma Chau is a demonstration base for cooperation among the top high-tech companies, R&D institutions, and universities, prioritizing the development of six key areas, including medical technology and big data, and artificial intelligence. But this is only an innovation chain. I think Hong Kong still needs an industrial chain. For example, Hong Kong can develop some high-end manufacturing industries to complement scientific research and innovation, attracting many enterprises to Hong Kong. In addition, there are taxation, channels, and price advantages for Hong Kong to enter the international market and the mainland market. Bright prospects are waiting for Hong Kong.