In the fight against COVID-19, disinfectant and nucleic acid test kits are vital to early detection and maintaining hygienic conditions under quarantine. How have the enterprises manufacturing epidemi

In the fight against COVID-19, disinfectant and nucleic acid test kits are vital to early detection and maintaining hygienic conditions under quarantine. How have the enterprises manufacturing epidemic prevention supplies resumed operations and sustained production?

On the afternoon of February 19th, over 50 journalists from various Chinese and foreign media outlets visited two Guangzhou-based enterprises DAAN GENE and Blue Moon Group in Huangpu to see how these enterprises have gotten back to work during the COVID-19 epidemic following their visit to two Foshan-based manufacturers. 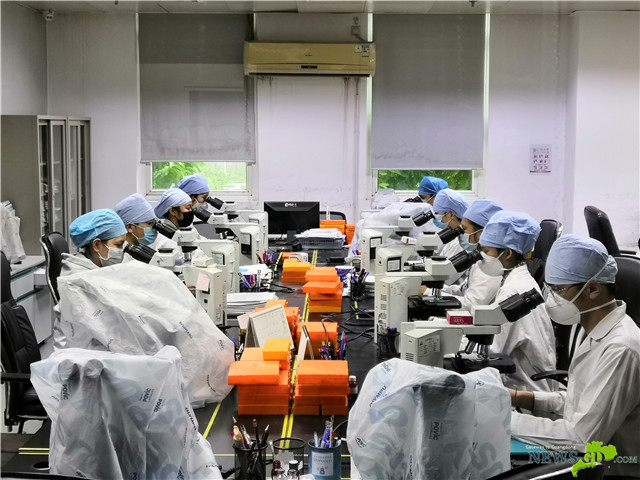 Gazing through the windows at DAAN GENE’s Yunkang clinical lab, reporters wearing protective gear were captivated by the scene before them: suspected coronavirus samples from across Guangdong were being processed, analyzed and tested. They were told that the lab is able to complete the analysis of about 10,000 specimens each day.

On January 12th, the Chinese Center for Disease Control and Prevention (CDC) and the World Health Organization (WHO) jointly published the genetic sequence of the COVID-19.

One day later, DAAN GENE had developed the COVID-19 RNA detection kit (PCR-fluorescence probing method), being one of the only two manufacturers to release the details of their self-developed nucleic acid detection kit nationwide and the only company in Guangdong to do so.

On January 28th, DAAN GENE was one of the seven enterprises to obtain a registration certificate from the National Medical Products Administration and began manufacturing the detection kits.

“The conventional capacity of the nucleic acid test kit is about 50,000 runs per day, but ours range between 300,000 and 500,000 per day and capacity could be stretched to one million per day if needed,” Zhang Bin, Deputy General Manager of DAAN GENE, told the reporters.

“The key is that we own both the core raw materials and control the whole industry chain for nucleic acid detection technology, including R&D, quality control, and detection services,” Zhang explained. Now the company’s nucleic acid test reagents are widely applied in both CDCs and medical institutions at all levels.

“We are not resuming operations and production, we have never stopped working,” Zhang stressed. Over 600 employees have remained at work to ensure production and delivery of the kits, and some key departments are on shift duty around the clock. As of February 18th, the company had provided over one million nucleic acid test reagents to medical institutions throughout the country. 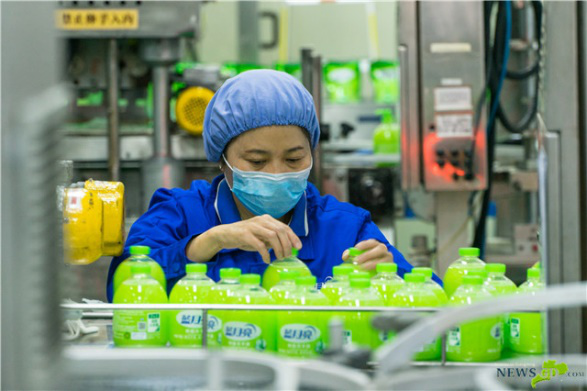 In fact, having implemented all the epidemic precaution measures required by the government, hundreds of front-line workers and second-line staff returned to work on either the first or second day of the CNY, back to work for 25 days already, according to Xu Yuling, Deputy General Manager of Blue Moon Group.

With strong government support, the factory was able to commence full production in two shifts starting February 2nd. 80% of employees have returned to work, and it will soon be 100%, said Xu. Currently, the company has achieved a daily production capacity of more than 400 tons, which is in fact three times that of the same period in previous years.

To help in the fight against the virus, the company donated 5.2 million RMB worth of disinfectant and cleaning supplies, including anti-bacterial hand wash and bleach products to Hubei during the Spring Festival, Zeng Liqun, Marketing Director of Blue Moon Group, said in the interview with the reporters. 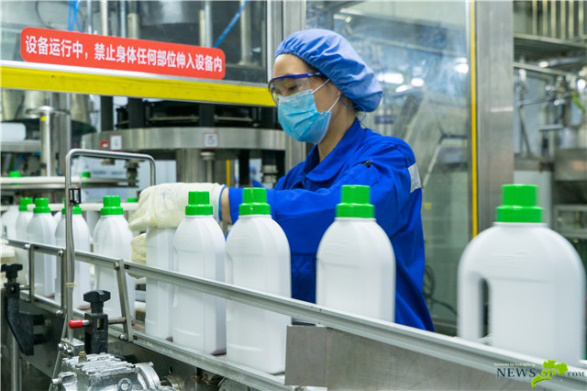 Over 93% of enterprises above designated size have resumed production

During the crisis, Huangpu district government has assisted enterprises in purchasing over one million masks, providing on-duty employees with online services including health monitoring, diagnosis, epidemic information inquiry and delivery of daily supplies. There are also free services available to enterprises such as online collaborative cloud work, cloud procurement and collaborative manufacturing.