China claimed the ticket to the 2020 Tokyo Olympic Games following their 3-0 triumph over Turkey in the Tokyo Volleyball Qualification women's Pool B tournament here on Sunday. 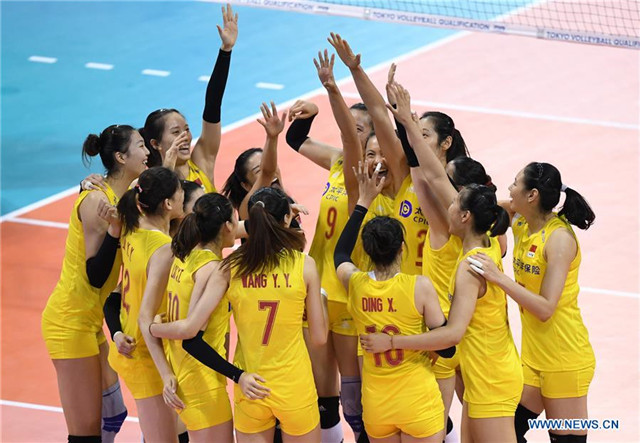 Players of China celebrate victory after the women's Pool B match between China and Turkey at the 2019 FIVB Tokyo Volleyball Qualification in Ningbo, east China's Zhejiang Province, Aug. 4, 2019. (Xinhua/Li Jundong)

China claimed the ticket to the 2020 Tokyo Olympic Games following their 3-0 triumph over Turkey in the Tokyo Volleyball Qualification women's Pool B tournament here on Sunday.

Ebrar Karakurt had 15 points for Turkey, but she couldn't get much help from teammates, as no other Turkish players scored double-digit points. Turkey committed 19 errors while China had only eight.

Prior to the match, both sides had two straight wins in the four-team round-robin pool, with the winner taking the ticket for the Tokyo Games.

It was China that took the initiative in the decisive match and led 14-9 on a spike by star spiker Zhu Ting in the opening set. After Turkey managed to claw it back at 14-16, China again extended the lead to 22-16 starting with a spike from setter Ding Xia, and took the set 25-18 as Cansu Ozbay's spike flied outside.

The following set was much easier for the Chinese team, as they led as many as 13 points and cruised to a comfortable win 25-12.

Turkey came back strongly in the third set and entered the first technical timeout at 7-8, only one point behind. China then enlarged the margin to 18-13 and took the set 25-18 after Zhu Ting served for an ace.