The first European Business in China Awards Gala was held at the Hilton Futian Hotel in Shenzhen.

The first European Business in China Awards Gala was held at the Hilton Futian Hotel in Shenzhen. This event, organised by the European Chamber South China chapter, aims to recognise businesses who have made exceptional contributions to the business community in both China and Europe, and act as role models. Over 250 representatives from enterprises, government, international schools, consulates and the media attended.

The Outline Development Plan for the Guangdong-Hong Kong-Macao Greater Bay Area (GBA) was officially unveiled therefore the construction of the Greater Bay Area has recently become a hot topic.

Ricky You (left), Plant Manager of the Carl Zesis Vision (China) Ltd took a photo with the prize

“The GBA is a very powerful movement to link up the core competitiveness of the Guangdong, Hong Kong and Macao city cluster. It will definitely benefit Zeiss’s development in China.” Ricky You, Plant Manager of the Carl Zesis Vision (China) Ltd. told Newsgd.com. His company won the Innovation & Intelligence Award at the Gala.

TUV Rheinland, a German high-tech company who has set up a branch in Shenzhen also showed great confidence in the GBA. “We believe with the GBA project we can better utilize our resources from Guangzhou, Shenzhen and Hong Kong where we’re already established. But now it’s also a better chance for us to share our resources and knowledge and support our customers more”, said Daniel Lee, the Managing Director of the company. 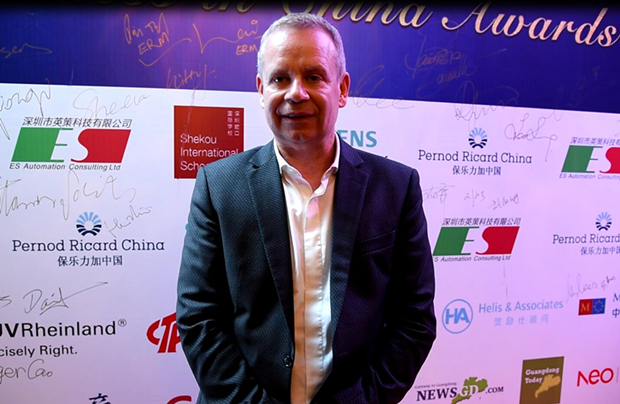 Thomas Schimitz is being interviewed on Newsgd.com

Thomas Schimitz, CEO of Andritz (China) Ltd. told journalists that his company has been in Foshan for nearly 20 years. “The Bay Area is our home. Guangdong already has big cities like Guangzhou, Foshan, Dongguan, Zhongshan, Jiangmen and Zhuhai. The GBA is providing more infrastructure, more logistics capability and more transport opportunities for people”. Schimitz’s company won the Top Performer in China Award at the Gala.

During the Gala, Mr George Lau, Chair of the European Chamber South China Board said: "The European Business in China Awards Gala actively promotes best practices from European companies in China across different fields. It is a platform for sharing and exchanging experiences between businesses in China and foreign countries. We hope to recognise the contributions made by companies to local communities in South China and encourage communication between Europe and China for future success.”