New Limburg holiday guide reveals 'the many faces of Limburg'

The new Limburg Holiday Guide is here! Premiering ten different covers with ten real Limburg faces that welcome the reader. The Limburg Tourism Office wants this premiere to highlight ‘The many faces

The new Limburg Holiday Guide is here! Premiering ten different covers with ten real Limburg faces that welcome the reader. The Limburg Tourism Office wants this premiere to highlight ‘The many faces of Limburg’. Like the wide variety of landscapes and experiences. And, of course, the people themselves. Because it is also the over 870,000 Limburg locals who make Limburg a unique region. They give hospitality a face. 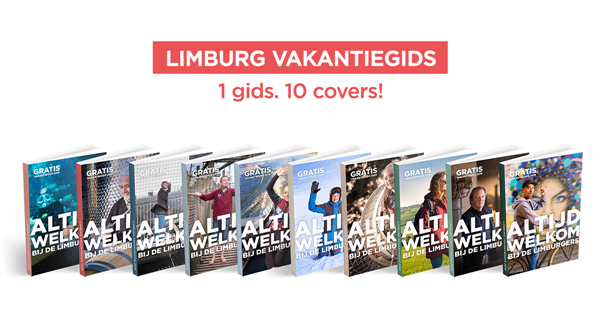 The many faces of Limburg

Limburg has many faces. Thanks to the wide variety of landscapes, attractions, heritage, etc. And, of course, the people themselves. The Limburg Tourism Office wants the ten different covers to highlight Limburg’s versatility. Ten unknown Limburg locals on the cover, ten ambassadors, each with their own story, who welcome readers and take them on a journey through the variety of landscapes and experiences in Limburg on ten different covers. However, the content is identical. All the ambassadors have contributed to each guide. One of them tells readers about their favourite places and experiences in handwritten tips and notes per Limburg experience zone.

The Limburg Holiday Guide celebrates its fifth anniversary. It is still the guide for anyone who wants to discover ‘The many faces of Limburg’ during a stay or day trip. This includes Limburg locals themselves! Once again, it contains over 300 inspiring pages full of photos, experiences, child-friendly activities, tasty tips, places to stay, and ten ready-to-ride cycling routes from the Limburg Bicycle Paradise app.

The 2019 Limburg Holiday Guide is the result of an intense collaboration between the Limburg Tourism Office and no less than 225 public and private partners. Never before have so many cities, municipalities, and tourism businesses in Limburg joined forces with the Limburg Tourism Office to further strengthen Limburg’s position as a tourism destination using this guide. This will also strengthen the leisure economy and give Limburg locals insights into the wide range of leisure opportunities in their own region. This way, tourism not only creates more prosperity but also more well-being for Limburg locals.

Over 300,000 copies of the free Limburg Holiday Guide are distributed throughout Flanders. A digital copy is already available at altijdwelkominlimburg.be.

Check out visitlimburg.be for more info.