China's preventive measures equally apply to everyone regardless of nationality or race, and I can feel that they aim to protect every resident well in the country.

On April 29th, Gabonese doctor J. Christian Nzengue, who speaks Chinese fluently, gave a lecture providing health advice during the COVID-19 outbreak to students at Panyu's Clifford School in Guangzhou. Dr. Nzengue said he had enjoyed it very much and will visit the school and teach students how to prevent the epidemic as a health instructor every other week over the coming months.

Dr. Nzengue, now 45 years old, came to study Chinese in Beijing from the Republic of Gabon in Africa in 1990. One year later, he was enrolled at the Sun Yat-sen Medical University (Now the Zhongshan School of Medicine, Sun Yat-sen University) with excellent grades. As of now, he has lived in China for 30 years and has worked for the Clifford Hospital in Panyu for 17 years.

"China is now the safest place in the world."

In addition to giving lectures, the doctor is also helping the Clifford School to supervise students' health condition and is providing guidance on disinfection in the campus.

He believes that China's anti-epidemic measures such as checking temperatures, wearing masks and staying indoors as much as possible are extremely necessary despite the disruption to daily life.

"China could hardly have controlled the outbreak so quickly without the strict preventive measures and people's tremendous amount of self-discipline. I think it is really remarkable," the doctor said.

He continued, "China's preventive measures equally apply to everyone regardless of nationality or race, and I can feel that they aim to protect every resident well in the country. China is now the safest place in the world."

With the pandemic still developing on the global stage, Dr. Nzengue wants to do what he can to keep the students on guard and keeping them paying attention to wearing a mask and washing their hands properly.

Back in late January, the sudden outbreak interrupted him and his wife's travel plans and he chose to stay in Guangzhou. "We didn't know much about the virus at the time, and some people advised us to leave. We were very worried, but this is our home, and we have a lot of friends here, so we had no reason to leave," he recalled.

During the pandemic, Dr. J. Christian Nzengue and his wife not only canceled their travel plans, but also tried to stay at home as much as possible, and only went out for work and purchasing necessary groceries. "Together with all the residents in Guangzhou, we have gotten through the most difficult time. As it turns out, I made the right decision to stay here. Now some of my friends overseas are envious of my life in China," he added.

"All I knew about China was Chinese martial arts when I was young," Dr. J. Christian Nzengue recollected during his interview with Newsgd.com on April 29th. He explained that both he and his elder brother are big fans of Chinese martial arts and Kung Fu legend Bruce Lee. Dr. Nzengue’s brother came to China first and became a martial arts actor, suggesting that his younger brother should come and join him in China. In 1990, a 16-year old J. Christian set foot in China for the first time to pursue his dream of becoming a doctor.

Dr. Nzengue took only one year to finish his language course and passed the HSK test in Beijing. In 1991, he arrived in Guangzhou and started his medical studies at Sun Yat-sen University. After graduating as a Doctor of Medicine, J. Christian became a general surgeon at Clifford Hospital and was the only foreign doctor at that time.

Dr. Nzengue thinks he is no different from any other Chinese doctors despite his skin color. "Some patients wave their hands and say, ‘I don't speak English’ when they first come to my office and see that I am a foreigner. And I simply say hello to them in Chinese and let them know it doesn’t matter. I speak Chinese."

Dr. Nzengue stressed that the key to practicing medicine is to be patient. "Some patients rush into my office and ask me to prescribe medicines without consultation. I will explain to them that we have to find out what is wrong before any prescription can be made. Most patients accept my advice." 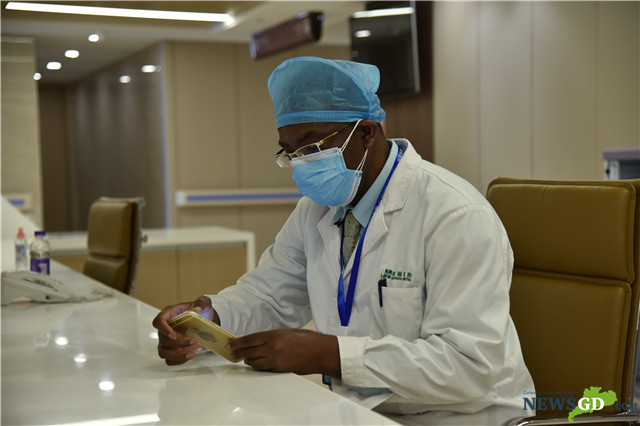 After living and working in Guangzhou for so many years, Dr. Nzengue considers himself a Guangzhou local. He gets on really well with the people in his neighborhood and workplace. His wife is a Guangzhouer, and they have an eight year old child. Both of them are travel enthusiasts and have been to many cities across the country, including Shanghai, Tianjin, Chengdu and Kunming.

Dr. Nzengue said that Guangzhou is his favourite Chinese city, especially the weather. "Guangzhou has a lot of greenery and a mature transportation network such as the metro, making it very convenient," going on to add, "It might be cold and wet in winter, but the long, sunny summer days remind me of my country a lot."

Dr Nzengue is proficient in both Mandarin and Cantonese, but he is not satisfied with that. "I watch CCTV's programming a lot. The hosts speak perfect Chinese. That level of proficiency in Chinese is my goal."