[Master④] From a special troop member to Tai Chi inheritor

Tai Chi is a martial art with unique Chinese cultural charm, and was inscribed on the UNESCO Representative List of Intangible Cultural Heritage of Humanity. At present Tai Chi has attracted millions
.

Tai Chi is a martial art with unique Chinese cultural charm, and was inscribed on the UNESCO Representative List of Intangible Cultural Heritage of Humanity. At present Tai Chi has attracted millions of practitioners worldwide, and Wu (Hao)-style is one of the most popular branches.

Zhou Qian is the 6th generation descendant of the Wu (Hao) -style. Used to be a special forces team member, Zhou Qian learned martial arts at an early age and practiced Sanda kickboxing, Taekwondo, and many other martial arts styles before. 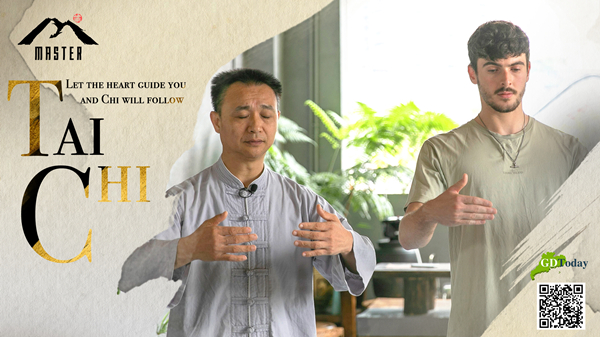 Eventually, Zhou Qian decided to practice Tai Chi. Then Zhou looked for masters everywhere. In 2012, he heard of a Master named Koh Ah Tee in Malaysia, the notable Tai Chi Master Cheng Man-Ch'ing's disciple. As a result, Zhou flew to Malaysia every year for five consecutive years to learn from Master Koh, and each time he stayed for a month.

During the 2018 Spring Festival, Zhou Qian was introduced to Master Zhong Zhenshan, the 5th generation of descendants' of the Wu (Hao) -style, and formally apprenticed to him several months later.

In Zhou's eyes, the connotation of Tai Chi is not only those simple movements but also contains rich philosophy, which is called "learning boxing and understanding the truth."

The traditional Chinese philosophy and concept of health preservation in Tai Chi, such as the cycle of Yin and Yang, the harmony of humans and nature, enriches people's understanding of the universe, nature, and the law of the human body, and gradually cultivate people's peaceful, inclusive and friendly minds.

Zhou strongly suggested young people learn Tai Chi. "When you practice Tai Chi well, you may find it's much easier to learn calligraphy, and traditional Chinese painting, as these are traditional Chinese culture and there are inherent links," Zhou explained. Zhou believes that learning Tai Chi for young people could help them calm down and focus on something they are interested in.