"Every winter and summer vacation, and even every weekend, many children from nearby and surrounding cities will come here to study Choy Li Fut. I might have taught tens of thousands of children in th
.

"Every winter and summer vacation, and even every weekend, many children from nearby and surrounding cities will come here to study Choy Li Fut. I might have taught tens of thousands of children in the past ten years." When talking about the inheritance of Choy Li Fut, the current master in Buk Sing branch Fang Shengtang is very proud.

Choy Li Fut was created by Chan Heung, from Xinhui County of Jiangmen City in Guangdong Province. Chan had a passion for martial arts even as a child. He successively studied Choy Gar, Li Gar, and Hung Kuen. Eventually, he gathered the best of each branch to create a new form of boxing, named "Choy Li Fut," to memorize his three teachers. 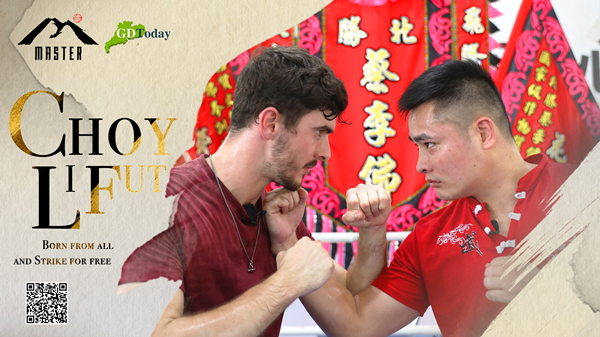 Why is Buk Sing a Branch of Choy Li Fut? In 1929, Gu Ruzhang, the master of North Shaolin, and four other northern martial arts masters went to Guangzhou to teach martial arts. Tam Sam heard about it and paid a visit to them. After they competed against each other many times, they admired and learnt from each other. "There is an old saying that the southern style of martial arts is strong in the fist and the northern style in footwork. After we learned the northern style's footwork, we adapted the current 'Buk Sing Choy Li Fut.'" Fang said.

Fang is an inheritor who has a passion for Choy Li Fut. He was born in Guangzhou and started martial arts at the age of 8. "I used to learn boxing very hard. Every day I was required to do the footwork and punches thousands of times." Fang Shengtang said. Now he runs martial art schools, sends martial art courses to campus, and even invests in filming online dramas themed with Choy Li Fut. Fang has invested more than 100 million yuan in Choy Li Fut's inheritance.

Moreover, cooperating with the Guangdong Martial Arts Association, Fang has set up a comprehensive program to promote Choy Li Fut to students in Guangdong.

Recently, Choy Li Fut (Buk Sing Branch) has been formally listed as an extension of the national intangible cultural heritage representative project list. "I am the inheritor of this project, and I have a responsibility to pass on this project and promote it." Fang insisted.