The exhibition hall of Nanfang Media Group unveiled in the 2021 China Internet Media Forum, which is in full swing on November 24 & 25 in Guangzhou.

The exhibition hall of Nanfang Media Group unveiled in the 2021 China Internet Media Forum, which is in full swing on November 24 & 25 in Guangzhou. 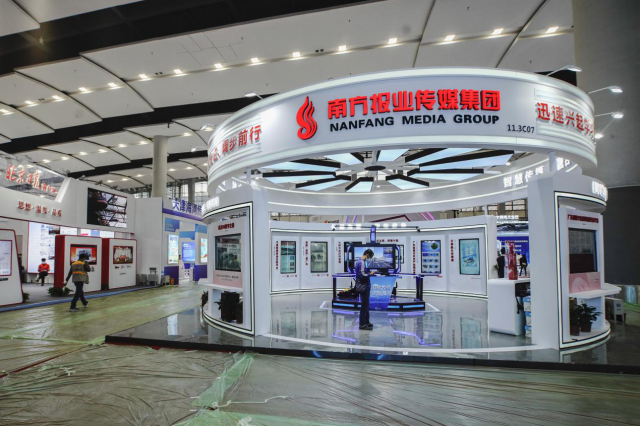 Nanfang Media Group has been promoting its online development through APPs, mini-programs, digital paper, websites, Wechat accounts, Microblog (counterpart of Twitter in China) accounts and other platforms since 2015.

In 2020, over 1.17 million pieces of news and 3000 livestreams were published on Nanfang Plus the APP, bringing users the latest and most extensive news with reliable sources. With more than 80 million downloads and 5.8 million daily active users, Nanfang Plus APP has attracted over 7,000 accounts and 15,000 new media workers. It has become the largest new media platform for releasing government news in Guangdong province.

Nanfang Media Group also highlights the spread of news in China, especially Guangdong, to friends from all over the world, mostly through the platform of GDToday. This year, Nanfang has published over 10 thousand news items covering English, Portuguese and Cantonese, in the form of articles, videos, livestreams, posters, photos, drawing more than 350 million hits from global followers.

After China Media Group（CMG）and People's Daily, the total value of Nanfang Daily, Southern Metropolis Daily and Nanfang Weekend, which all belong to Nanfang Media Group, hit 145 billion and 770 million RMB and ranked the third among all media brands in 2021 China's 500 Most Valuable Brands.