From August 13, all inbound travelers who have completed 14-day centralized isolation and returned to Guangzhou now need a 7-day home quarantine without going out.

At 10:00 am August 13, a press conference on COVID-19 epidemic prevention and control was held in Guangzhou. According to Chen Bin, deputy director of Guangzhou Municipal Health Commission, from August 13, all inbound travelers who have completed 14-day centralized isolation and returned to Guangzhou now need a 7-day home quarantine without going out.

Mass testing carried out in 11 streets in three districts, 389,511 tests done and all came back negative

At the conference, Chen Bin said the inbound traveler in Tianhe district who tested positive for COVID-19 was an imported case. Currently the patient is in a stable condition.

Closed management and disinfection have been carried out in these areas. As of 22:00 August 12, 47 environmental samples in key areas including ten in the case’s home were taken and all have tested negative. 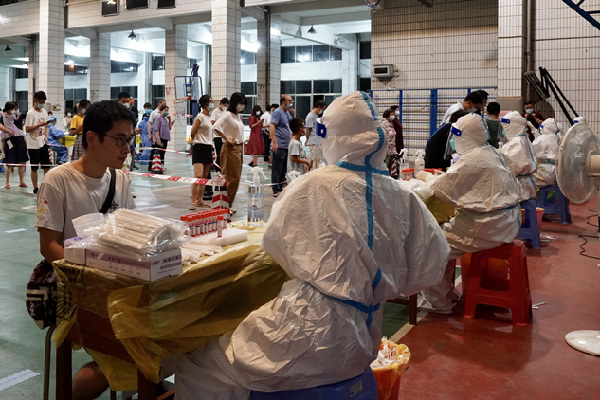 According to Zhang Zhoubin, deputy director and spokesman of Guangzhou CDC, in the coming days, some residents may receive messages or voice calls from AI phones. Some people's health code may turn yellow. Please don't worry if it happens, it only means you need to complete a nucleic test as soon as possible.

According to Chen Bin, people can make appointments at vaccination sites in all districts to receive recombinant new coronavirus vaccine (CHO cells), which is a three-dose vaccine. The recombinant vaccine, like the inactivated vaccine, is immunogenic and safe, so it is suitable for people aged 18 and above who are unvaccinated. At present, 371 vaccination sites are available in Guangzhou. People can participate in group vaccination through their work units or schools, or make appointments on "Guangzhou Health Kit" (广州健康通) WeChat official account, or go directly to local community health service centers for vaccination.

Update on COVID-19 cases in Guangdong

As of 24:00 August 12, Guangdong had reported a total of 2,947 confirmed COVID-19 cases, including 1,380 imported. Currently, 83 patients are being isolated or treated in hospitals.