The 129th session of the China Import and Export Fair, also known as the Canton Fair, will be held online between April 15th and April 24th this year. It is the third time the fair will be held online following two virtual events successfully held in June and October last year.

The press conference of the 129th session of China Import and Export Fair is held on the morning of April 14th at the Canton Fair Complex in Guangzhou. (Photo: Canton Fair)

A total of 50 exhibition areas will be set up, including a special area focusing on rural vitalization. The special area will help 1,160 enterprises in poverty-stricken regions explore overseas markets, and it is continuing to accept applications from more companies free of charge. 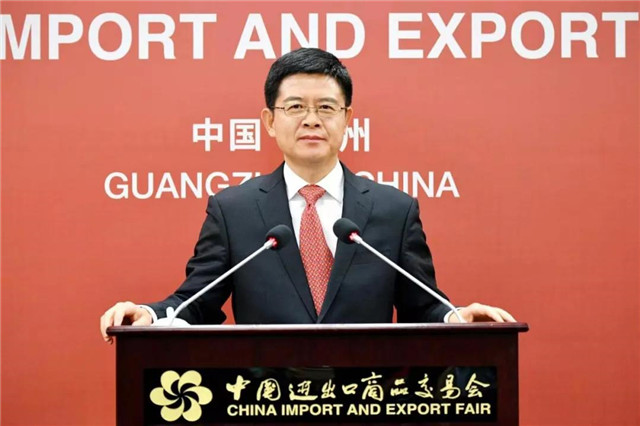 Xu Bing, spokesman of the Canton Fair, briefs the media from both China and abroad on details of the 129th Canton Fair. (Photo: Canton Fair)

So far, over 2.7 million exhibits have been submitted by about 26,000 domestic and international enterprises registered for the fair, with an increase of 230,000 exhibits compared to last session and including 820,000 new products. intellectual products and self-developed high-end products will be displayed via image-text, video, 3D and VR technologies.

The official website of the fair will be officially launched at 9 am on the morning of April 15th, featuring several major sections such as Exhibitors + Products, Global Business Matchmaking, News & Events, Services & Support as well as a VR Exhibition Hall and Exhibitors On Live.

The 129th Canton Fair will continue to hold a series of supporting activities, highlighting the Dual Circulation Promotion Event, 137 New Product Releases as well as the new product shows for those goods which gained the Canton Fair Design Awards in 2020.

The Services and Support Section on the official website of the Fair will provide exhibitors and visitors with high-quality online support services, such as online financing, trade financing, logistics, intellectual property protection and trade dispute settlement, advertisement booking and publishing services and product quality certification.

The 127th and 128th Canton Fair were successfully held online last year, with about 26,000 Chinese and foreign enterprises exhibiting online in each session and buyers from more than 220 countries and regions registering to attend the exhibition, make negotiations and strike deals.