The Maiden Voyage of the Empress of China

The Empress of China, a three-masted, wooden sailing ship of 360 tons arrived at the Huangpu Port in Guangzhou on August 28th, 1784.

The Empress of China, a three-masted, wooden sailing ship of 360 tons arrived at the Huangpu Port in Guangzhou on August 28th, 1784. The ship, loaded with ginseng, fur and other American goods, set sail from New York on February 22nd that year and took the European-Asian sea route to get to Guangzhou six months and seven days later. Forty-three American sailors and merchants arrived at the port with the ship, being the first Americans recorded to land on Chinese soil. 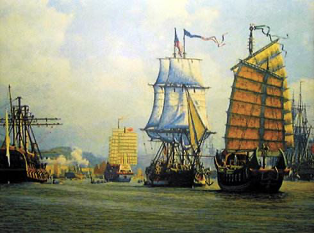 The ship left China three months later and returned to the US safe and sound. Its voyage marked the beginning of trade between the U.S. and China.

In the US, news of a trade route between the U.S. and China spread quickly. The Independent commented that the Empresses' journey was "wise, effective, and auspicious." Many advertisements for black tea, silkwear, porcelain, and other Chinese goods began to appear on the streets of New York. Chinese goods were sold out almost as soon as they arrived. Even George Washington acquired a teacup painted with an eastern dragon.

From 1784 to 1790, twenty-eight U.S. trading ships arrived in China. By 1790, goods exported from China accounted for about 17% of the total goods imported from the US. By 1792, the U.S. had become China's second largest foreign trading partner following the UK, who had been trading with China for over a century. Between 1784 and 1814, 618 voyages from the U.S. to China's Guangzhou were made.

In early works by westerners, Guangzhou was formerly known as "Canton" which was also used to name many U.S. administrative areas. A town in Suffolk County, Massachusetts was named Canton in 1789.

On August 28th, 1984, five U.S. cities held eight exhibitions to commemorate the 200th anniversary of the ship's arrival in China. The Philadelphia Maritime Museum also published a book entitled 'The Empress of China'.

The book cover of 'The Empress of China' by Philip Chadwick Foster Smith (Photo provided to Newsgd.com)

In 1986, the People's Bank of China issued silver coins in commemoration of the 202nd anniversary of the ship's arrival. The front side was the Great Wall, and the backside the ship.

The Commemorative Silver Coin issued by the People's Bank of China (Photo provided to Newsgd.com)

On August 28th, 2014, the Massachusetts state government announced that day as Guangzhou Day in celebration of the ship's 230th anniversary.

On October 5th, 2017, the filming of a movie based on the ship was announced in Hollywood, California.