<P>Those who have not experienced traditional Chinese medicine might question its effectiveness or safety, let alone its ability to treat a modern plague like COVID-19. But more people in the United S 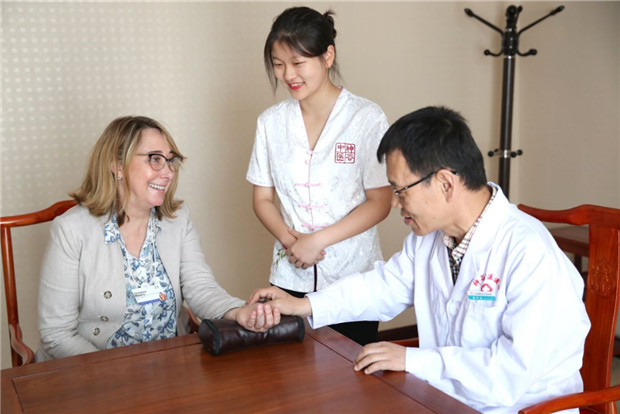 A woman has her pulse taken by a practitioner of Chinese medicine on July 3, 2019. [Photo by Zou Hong/chinadaily.com.cn]

Those who have not experienced traditional Chinese medicine might question its effectiveness or safety, let alone its ability to treat a modern plague like COVID-19. But more people in the United States are looking to this 1,000-year-old Eastern practice to counter the novel coronavirus.

TCM is often seen as alternative medicine, and at best a complementary treatment to modern methods. Aside from acupuncture and herbal remedies, it also includes practices that rely on supporting qi, the flow of energy in the human body.

When New York became the US epicenter of the COVID-19 outbreak in March, TCM doctors offered telemedicine and herbal remedies.

"When the COVID-19 outbreak hit China, I read an article in a Western publication and it made a case that a lot of these Chinese treatments are not necessarily objectively effective," said Frank DeRosa III, a New York resident who first sought out TCM in 2017 in Manhattan's Chinatown. "I disagree with that. People need to stop trying to intellectualize it and experience it for themselves."

Larry Guo, 66, a video editor at National Broadcasting Company, is not a fan of TCM, but he knows about it and has used it when "small problems" like cough and colds have arisen.

In March, after having chills and fever followed by days of chest pain and shortness of breath, he welcomed the idea of using TCM to alleviate what he assumed to be symptoms of COVID-19.

Guo got tested, but the results, he said, didn't arrive for another 10 days. By then, his wife, Mei Xia, 45, had already got infected. Her symptoms were different from Guo's. She had severe back pain and a fever that lasted for 17 days. But as Mei's symptoms worsened, and before Guo's test results came back, the couple looked for a TCM doctor in hopes of effective treatment.

They consulted Doctor Su Hong, the Bronx, New York-based president of the American Traditional Chinese Medicine Society, who later referred them for online consultation with Guangzhou-based Doctor Guo Jiewen, who was sent to Wuhan's Leishenshan Hospital in March to help treat COVID-19 patients.

To understand the severity of the disease, a book titled Handbook of COVID-19 Prevention and Treatment, written by Professor Liang Tingbo, chairman of the First Affiliated Hospital at the Zhejiang University School of Medicine, explains COVID-19's four clinical classifications as mild, moderate, severe and critical. In mild cases, patients have low energy and body aches, while in moderate cases patients show symptoms of fever and difficulty in breathing. These two types of cases, according to TCM doctors, can still be addressed with TCM. In severe and critical cases, a combined approach with Western medicine is recommended.

In the days that followed, Guo and his wife had daily virtual consultations with Dr Guo, who monitored them twice a day by checking their tongues, body temperature, heart rate, diet and bowel movements. Depending on his patients' conditions, the doctor would prescribe them some herbal formulation that varied every three days.

"When I took some herbal medicine, my body was suddenly in shock. I threw up, and I had diarrhea," said Larry Guo. "At that moment, I swore I wouldn't have any Chinese medicine again. But afterward, I felt better and my chest pain disappeared. Somehow, TCM helped me regain my hope." The herbal remedy had helped Guo recover and open up his shen (spirit), an important factor in TCM, said Su.

TCM's approach is different from Western medicine in the sense that it targets the underlying issues in the body. According to Doctor Frank Butler, who holds a degree in acupuncture and Chinese medicine and is the co-founder and director of advanced education and clinical care at Evolve Health & Wellness in New York, it is more about enhancing and optimizing functions in the body.

"In Western medicine, it targets the pathogen regardless of your age and weight. It wants to interrupt the replication of a microorganism," said Butler, who has treated 16 patients between ages 25 and 65－10 of whom tested positive for the virus－during the lockdown. "But in Chinese medicine, it's about optimizing the human body so you're more resistant to pathogens."

Doctor Jean Menges, a licensed acupuncturist and herbalist at NY Healing Inc, said: "In Western medicine, it's about getting a drug (for a particular virus) and lowering the inflammation response. But in Chinese medicine, it's about what we can do to get rid of the virus and how we can support the body's ability to do what it needs to do."

Fever, for example, is a common coronavirus symptom. TCM doesn't focus on the fever but instead on the hidden imbalances of the body.

"If your body is balanced, then it's able to mount a proper response and the fever is able to reduce through sweating, clearing the heat in the body," said Menges. "It's about supporting the mechanism for the body to mount a certain temperature that makes it inhospitable for these pathogens."

TCM results may vary from person to person, but it can be remarkably effective. "Chinese medicine is now more accepted than when I first started 30 years ago," said Butler. And with people increasingly becoming more aware of others who have gotten results, the demand for the treatments rises.

DeRosa added: "People in New York and in the Western world are now more open to these treatments. It simply piques their interest and curiosity."