Carrie Lam came to Guangzhou for the opening ceremony of the Canton Fair and the Pearl River International Trade Forum, days after her 2021 Policy Address was published.

In the interview, Carrie Lam expressed her enthusiasm for the Canton Fair, “import and export trade is still a very important part of Hong Kong’s economy, and that’s why opportunities provided by the Canton Fair are significant to us.” 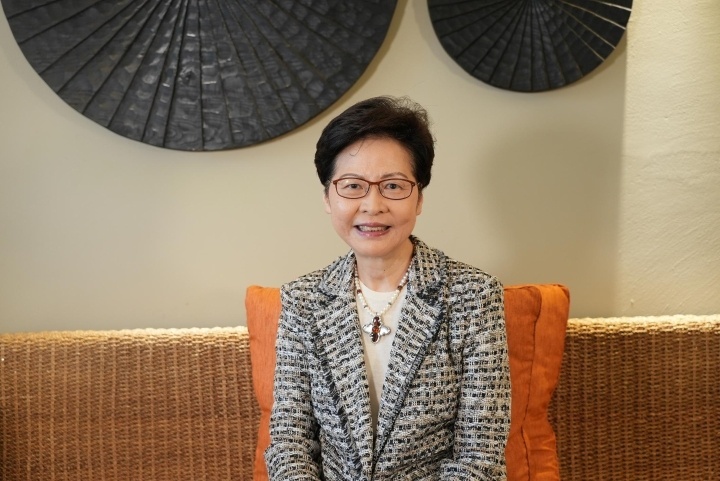 Carrie Lam said that the 130th Canton Fair would make her feel unique. She was impressed by the model of holding online and offline exhibitions in the same time.

Hong Kong used to be a manufacturing center, and there were many things to export. Later, many factories in Hong Kong moved to Guangdong, and the products were produced in Chinese Mainland and exported to Hong Kong.

"Import and export trade is very important to Hong Kong businessmen. The Canton Fair is a key point for them to do business." she said.

Carrie Lam shared the current data of Hong Kong's import and export trade, “The value of Hong Kong's merchandise imports and exports in the first eight months of this year was 6.5 trillion HKD, a record high. On the one hand, the Chinese mainland has resumed production because of optimal control of the COVID-19 pandemic; on the other hand, there is a demand for goods internationally."

Carrie Lam mentioned that the Guangdong-Hong Kong-Macao Greater Bay Area (GBA) plays an important role in the overall development of China. Cities in Guangdong, such as Shenzhen, and Hong Kong, are highly complementary, and there is a lot of room for cooperation in the future, which can also bring tremendous opportunities. "The cooperation between Guangdong and Hong Kong will be an all-around cooperation."

She hopes that Hong Kong and Guangdong can jointly develop green finance in the future. China aims to have CO2 emissions peak before 2030, and the financial industry can also contribute to this, such as issuing green bonds. Shenzhen recently issued bonds in Hong Kong, part of which is green bonds. "I think the Hong Kong Exchanges and Clearing Limited (HKEX) can further their cooperation with the Guangzhou Futures Exchange (GFEX)."