Pete Truman, one of those foreigners, listed various great experiences he had while living in China and received over 330 thousand likes.

Editor's note: This is one of the series reports entitled "Thump up for China", sharing foreign netizens' experiences in China on YouTube, Twitter, Quora, Facebook, etc. In this report, we interview Pete Truman, a foreigner who has been living in Shanghai for many years and received 330 thousand likes for his post about China on Quora, which has been also shared by Hua Chunying, the spokesperson of China's Ministry of Foreign Affairs, on her Twitter.

"Which country have you visited that turned out to be nothing like how it is depicted?" Recently, this question on Quora caught a lot of attention from foreigners and many of them gave the answer: China!

Pete Truman, one of those foreigners, listed various great experiences he had while living in China and received over 330 thousand likes. Recently, Hua Chunying, the spokesperson of China’s Ministry of Foreign Affairs, shared Pete's post on Twitter and said, "The real China has surprised many people the first time they met. An opening up China welcomes you and will surely impress you.“

Pete Truman comes from UK, currently living in Shanghai. He is a software engineer. On Quora, he always uses his real-life experience to answer questions about China, such as "Why China can control COVID-19 so quickly, but other countries are still suffering from it?" "Why so many foreigners go to China and say China is good?"

He also opened a personal website called "Daily China Life." On his website, he shared his experiences in China and gave free advice on clothing, housing, food and transportation to foreigners who plan to visit China.

Q: How did you feel about China for your first visiting?

A: I'm from UK, currently working as an IT software engineer in a company in Shanghai. This is my fourth-year living/working in China. Recently, I'm informed my work contract in China has been extended by one year. The extension is exciting news as I enjoy living in China.

In 2016, I first time travelled to Chinese mainland, and the first city I launched is Beijing. I was travelling alone and had no clue of the local language and culture. I still remember that I was struggling at the Beijing Railway Station, where I spent more than an hour to collect my ticket. But I still had a nice trip later because people there were very supportive.

When I was travelling to Chinese mainland for the first time, I was kind of "surprised" to how good everything is. The roads are so clean, the transportation is so convenient, and people are so friendly. These are completely different from what I learnt before from western media, which always say China is a "poor" and "depressed" country.

Q: Why did you decide to work in China?

A: I came to China for a few times at the same year after the first visiting. I also visited some of called "must visit" cities, such as Xi'an, Chongqing, Chengdu, Guangzhou, and Xiamen. My initial trips turned out to be a great learning experience, and I decided to work in China.

Luckily, majoring software engineering makes me easy to find a well-paid job in China. I moved to China in 2017 for a full-time job, and now I am in my 4th China year. I was given the Class A work permit, the highest-class work permits available for foreign talent.

I have been to over 50 cities in China. I have been a solo traveler, every single time. During my trips, I thoroughly interacted with the locals, and made friends with them, some of them are in my WeChat as well.

Q: What are the things that attract you most while living in China?

A: There are so many reasons why I love China. For example, China is the safest country I have ever been. It has heavy deployment of security personals in the public. China is very digitalized, such as online shopping and cashless payments, which makes life pretty convenient. China does really well in protecting cultural sites. People can learn about the country's history in many places. Also, the Chinese philosophy is deeply influenced by Confucian and Buddhist values, so they are really kind. Even though they would generally be shy, they are very friendly and love making friends.

I can share some examples that make me feel especially good.

During my initial days working in China, I went to one of the cold noodle restaurants near my apartment. But I didn't know how to use chopsticks and I'd ask for the forks and spoons at the restaurant. The next time I went to the restaurant, the owner bought a fork just for me.

I have been a vagabond traveler, and wandered in the Chinese cities in the days and nights. I have seen massive cities, and traditional countryside. In China, you don't need to worry about the gun violence. No issues with safety. Never. Ever!

I had a hard time in 2019 since I was detected with a high level of diabetes, and often visited hospitals to monitor my health. This made me learn more about Chinese medical service. Despite a huge population, the hospitals are super well managed, and it's very normal to meet a specialist doctor without any prior appointment. The fee for medical service is generally cheap. It’d cost me 18 RMB for consultation and the blood test, and the doctors were very friendly. Now, my health problem is under control and I am very thankful to the Chinese medical service.

Q: We realize that you always have strong enthusiasm to show foreigners how the real China looks like.

A: I think China is a "hidden jewel", waiting people to discover her beauty.

I feel that there is not enough awareness about China and Chinese culture in the western countries. I thought I would be fair to share some of my real-life experiences about living in China. In particular, since I have already been living in the Chinese mainland for a few years and I know basic Chinese, I can act as some sort of a "bridge" between China and the western world and share meaningful information in a positive way.

Running a simple blog/website could be very helpful since it can be assessed worldwide. Therefore, I launched the site in 2020. Further, foreigners often have myriads of questions about living in China. So, I try to answer relevant questions in my blog posts. 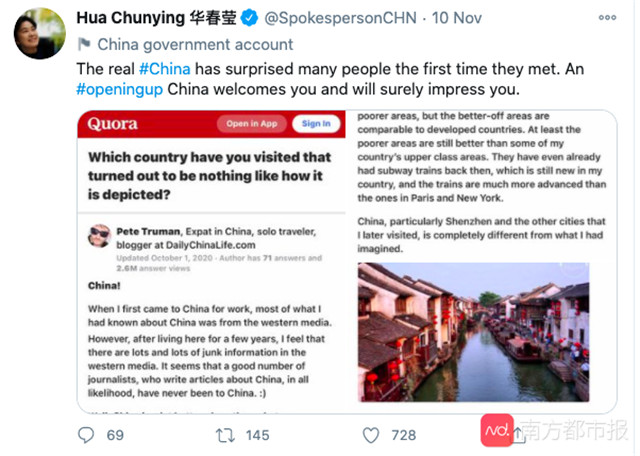 Q: Recently, the spokesperson of China's Ministry of Foreign Affairs Hua Chunying commented on Twitter about your Quora answer. How do you think about her comment?

A: It feels good to see the post shared by Hua Chunying. It's great if I can increase the awareness about China.

In fact, quite often, I quote members of the Chinese Foreign Ministry, including Wang Yi, Hua Chunying, Wang Wenbin, in my answers on Quora. I have already known them for a while.

Q: There are still some stereotypes, bias or even discrimination about China in western world. In your opinion, what are the reasons behind this?

A: I agree there are biases and stereotypes about China and Chinese people. Often, Quora questions are loaded as well. For example, just a couple of days ago, I answered a question: "Is China really a backward country?" I was surprised to see such question. So, I answered this question, and clarified why China is NOT a backward country.

I think Chinese universities can promote exchange programs, New York University Shanghai and Liverpool University Xi'an are great examples. It would also be good if we can increase visibility of the Chinese media to the foreigners.

Overall, I feel fortunate to have the opportunity to live in China. There is so much we can learn from China. I also recommend people who want to know about China to come here with an open mind and explore by yourself. Don’t blindly trust the western media.