Bruce Douglas Haigh, who was born in 1945, is an Australian political commentator and former diplomat. He served in South Asia, the Middle East, South Africa with the Australian Embassy. Haigh has bee

Bruce Douglas Haigh, who was born in 1945, is an Australian political commentator and former diplomat. He served in South Asia, the Middle East, South Africa with the Australian Embassy. Haigh has been closely following the development of China and the China-Australia relations.

The Communist Party of China (CPC) has been a force for change, and it has helped the people address and create changes, said Haigh in an exclusive interview granted to the Southern Metropolis Daily. And CPC has a significant and critical relationship with the people of China and the soil of China, he added. 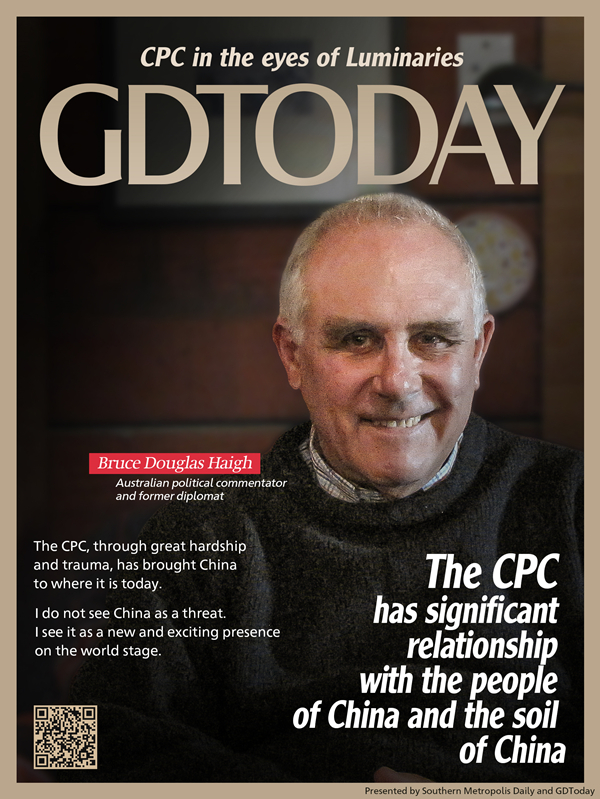 Southern Metropolis Daily: What do you think of China's achievements over the past century?

Bruce Haigh: Everything that has happened in China over the past 30 years has been remarkable. Material and technological success, lifting people out of poverty, eliminating disease and addressing climate change are extraordinary successes for China. Spiritual and emotional growth is also significant, linked to creativity - art, music and thought.

Southern Metropolis Daily: This year marks the 100th anniversary of the founding of the Communist Party of China. What is your impression of the CPC?

Bruce Haigh: The CPC, which through great hardship and trauma, has brought China to where it is today. It has a significant relationship with the people of China and the soil of China.

It is not easy. There must be a give and take if strength and loyalty are to be maintained. It is not easy finding and maintaining that balance. It is a never-ending challenge.

I do not see China as a threat. I see it as a new and exciting presence on the world stage.

Southern Metropolis Daily: What do you think of the future of the China-Australia relationship?

Bruce Haigh: The current leadership in Australia does not have the skill to engage in meaningful diplomacy anywhere globally. I think China must help Australia find its way in the new post-Covid world.

The future relationship between Australia and China will be excellent and dynamic and will occur when Australia develops the courage to stand on its own two feet.

Asia is where the future of Australia lies.