According to Jacques, the Communist Party of China has creatively explored a development path suitable for China, thereby pushing China's various undertakings forward.

For many years, Martin Jacques, a senior researcher at the University of Cambridge, has been committed to studying the similarities and differences between the Chinese development and Western models. He has his understanding of the root of the Chinese Communist Party's governance. Many of his works have extensive influence and popularity throughout the world.

Recently, Martin Jacques granted an exclusive interview to the Nanfang Daily. According to Jacques, the Communist Party of China has creatively explored a development path suitable for China, thereby pushing China's various undertakings forward. It provides the world with a state-of-the-art thinking and global governance solution with Chinese characteristics, and this can be an example for developing countries. 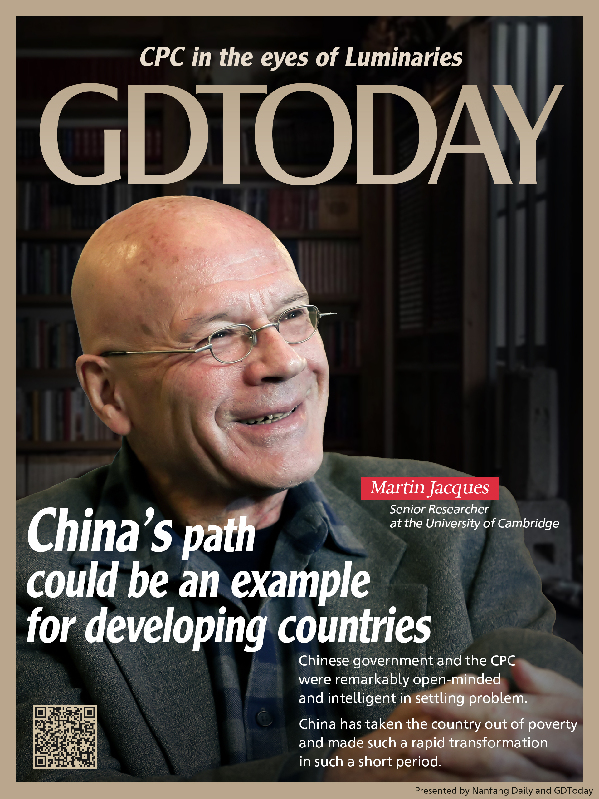 Nanfang Daily: How do you evaluate the ruling practice of the CPC?

Martin Jacques: I think the Chinese government and the CPC were remarkably open-minded and intelligent in settling problem.

First of all, the CPC is very deeply rooted in China. Secondly, it's very creative. It doesn't just carry on doing the same thing. It's constantly aware that its future is not guaranteed. If you're going to keep developing the human being, you've got to keep reinventing yourself, not just evolving. So, I think that's a great challenge. History suggests the CPC is very good at it, and it has been very good at it.

Nanfang Daily: How do you comment on China's efforts on poverty reduction?

Martin Jacques: We need to look at this from a longer historical perspective, which is back in 1978, the great majority of the Chinese lived in poverty. So，the task was really to take the whole population out of poverty. It's an extraordinary achievement to have done this.

I hope that this can be a mirror in other countries. I think this is a great challenge. China is not the only country that grows rapidly in the developing world, but its performance has been outstanding.

Martin Jacques: It's a remarkable phenomenon, and we've never seen this in modern history. Indeed, China has taken the country out of poverty and made such a rapid transformation in such a short period.

China's now in a very new stage in its development. The population is far more educated. The economy is far more sophisticated. It's now reached for the first time more or less, the leading edge of technology in the world in some areas. Now its voice is becoming more and more important on the global stage.

Nanfang Daily: How do you comment on how the West see China?

Martin Jacques: For the West, there's not a common language between China and the West because the west has been relatively rich and powerful for a long time. And the political systems are organized in a very different way.