The accelerated restructuring of the global value chain and the fast-growing digital economy will transform the 65-year-old China Import and Export Fair from a goods trade-themed grand event into a comprehensive business platform enriched by trade in services and technologies, said experts on Thursday. 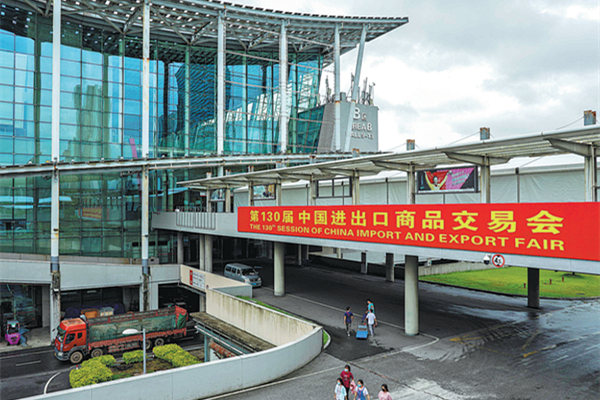 Pedestrians walk past the venue of the 130th session of China Import and Export Fair in Guangzhou, Guangdong province. [Photo/Xinhua]

The accelerated restructuring of the global value chain and the fast-growing digital economy will transform the 65-year-old China Import and Export Fair from a goods trade-themed grand event into a comprehensive business platform enriched by trade in services and technologies, said experts on Thursday.

Commonly known as the Canton Fair, the event has shifted its format from a purely goods exhibition to the integration of both online and offline activities this week. It has attracted more than 33,700 firms providing both goods and services to showcase their wares and introduce services during the 130th session of the Canton Fair from Friday to Tuesday in Guangzhou, capital of Guangdong province.

Since the technological edge, innovation and manufacturing strength of Chinese companies noticeably soared in recent years, it is natural that the fair's role has transformed from goods trade to all-round trade, formed by the exports and imports of goods, services and technologies, said Sang Baichuan, dean of the Institute of International Business at the Beijing-based University of International Business and Economics.

"In the past, China mainly traded in goods. But the nation today has already become a major player in intellectual property rights, with a large number of patent application volumes," Sang said, adding that under such circumstances, the country is bound to promote trade in services and technologies at the fair this time.

Trade in services refers to the sale and delivery of intangible services, such as transportation, tourism, telecommunications, research and development, human resources, education, healthcare, construction, advertising, computing and accounting.

In addition to separating the exhibition area into 51 zones based on the categories of products, advanced services and technologies, all will be displayed at both online channels and offline booths during the fair, according to information released by the Canton Fair's organizing committee.

Supported by a sound business environment, the tangible growth of pilot free trade zones and industrial upgrading, as well as a massive domestic market, the ranking of China's trade in services secured the 14th position worldwide this year, up from 20th in 2020, according to an annual report released on Wednesday by the Chinese Academy of International Trade and Economic Cooperation, a Beijing-based government think tank.

The study, "Report on Development Index of Trade in Services in the World (2021)", said the scale index of China's trade in services rose from 8th last year to 4th this year and the structural index of the sector jumped from 67th to 53rd.

With a focus on promoting high-quality development and supply-side structural reforms, China will soon release a plan to grow trade in services during its 14th Five-Year Plan period (2021-25). The plan will seek to accelerate the country's reform and opening-up and the digitalization process, optimize industry structure and regional layout, support market players and enrich cross-border cooperation, said the Ministry of Commerce.

As the opening-up of the services sector and trade in services have increasingly become important areas of economic and trade cooperation between countries, the innovative development of the services trade is a vital measure for China to cultivate new advantages in international competition, accelerate the pace of the dual-circulation development paradigm and achieve high-quality economic development, said Gu Xueming, CAITEC's president.

Under the dual-circulation model, the domestic market is the mainstay while the domestic and foreign markets reinforce each other.

China's trade in services surged 9.4 percent on a yearly basis to 3.27 trillion yuan ($504 billion) in the first eight months, said the Ministry of Commerce.