Hong Kong has basically met the requirements for resuming quarantine-free travel with the Chinese mainland, and a local health code system will be launched in early December, Chief Secretary John Lee Ka-chiu said on Thursday. 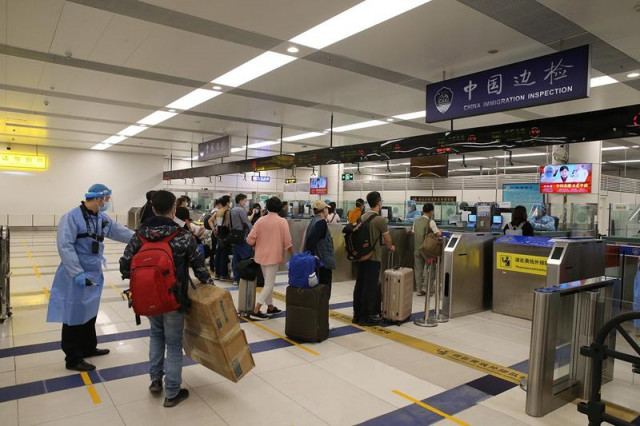 People line up at the Shenzhen Bay checkpoint on Nov 24 to enter the Chinese mainland. [Photo provided to China Daily]

Hong Kong has basically met the requirements for resuming quarantine-free travel with the Chinese mainland, and a local health code system will be launched in early December, Chief Secretary John Lee Ka-chiu said on Thursday.

His comments came after a meeting with mainland officials and experts in Shenzhen, Guangdong province.

Lee offered no timetable on the resumption of quarantine-free travel, but said the daily quota and other measures related to the reopening are being discussed.

The meeting, attended by mainland experts and officials from the Hong Kong Special Administrative Region, Guangdong, and the central government, was the second face-to-face talks on epidemic-control collaboration between representatives of the mainland and Hong Kong.

Earlier this week, a mainland delegation of experts finished a four-day visit in Hong Kong to examine the city's epidemic-control system.

Lee told media that the mainland experts said that Hong Kong had basically met the requirements for resuming quarantine-free travel, as it had adopted effective anti-epidemic measures.

He also cited Huang Liuquan, deputy head of the Hong Kong and Macao Affairs Office of the State Council, who said that the Hong Kong government's anti-epidemic strategy is consistent with that of the central government.

Noting that the meeting's atmosphere was "positive and good", Lee said Hong Kong and mainland experts will continue to exchange views on the matter.

He said the government is preparing for an orderly and gradual resumption of quarantine-free travel with the mainland. The measures will include a health code system, checkpoint management and contingency plans to identify and screen for risks.

Lee said the health code will be done in conjunction with the contact-tracing app LeaveHomeSafe in order to document a user's travel history.

Secretary for Innovation and Technology Alfred Sit Wing-hang said the Hong Kong SAR government will brief the public about the health code system next week and a user guide will be provided before its official launch in December.

Secretary for Food and Health Sophia Chan Siu-chee, who also participated in the meeting, said the government will strive to ensure that the border reopening will not cause additional risks to the nation, and added that Hong Kong will work hard to prevent any pandemic resurgence.

Chan added that high-risk and high-exposure groups will be required to have COVID-19 tests every two days. Currently, such groups are mostly required to undergo testing every three days.

To align with the mainland's standards, the Hong Kong government has bolstered anti-epidemic measures.

Starting on Dec 9, visitors to 18 kinds of leisure venues such as restaurants, gyms, hotels and cinemas will be required to scan the venue's QR code in the LeaveHomeSafe app before entering the premises.

As of Thursday, 4.72 million people－over 70 percent of Hong Kong's population eligible for vaccination－have received at least one dose of COVID-19 vaccine. More than 110,800 of them have received the third dose as a booster.