Chinese modernization and BRI contribute to common destiny of humanity

The 20th CPC National Congress sets a clear central task facing the whole Party and country: “From this day forward, the central task of the CPC will be to lead the Chinese people of all ethnic groups in a concerted effort to realize the Second Centenary Goal of building China into a great modern socialist country in all aspects…”

Assuming the annual CPI growth rate is 2.0 percent during this period, Chinese nominal GDP could hit 41 trillion USD by 2035 compared to 17.7 trillion USD in 2021, which is an increase of the size of America. By then, China will have a per capita GDP of 29,158 USD, higher than Czechia in 2021. However, taking account of its growth rate over the past 14 years, Czechia per capita GDP will be 37,680 USD by 2035. Hence, China will still be of the lower group among developed economies.

Yet China has to add an economic size of America to achieve its development goal, due to its super large population of 1.4 billion. It will be unprecedented in human history to increase such an enormous amount of economy within such a short period of time. 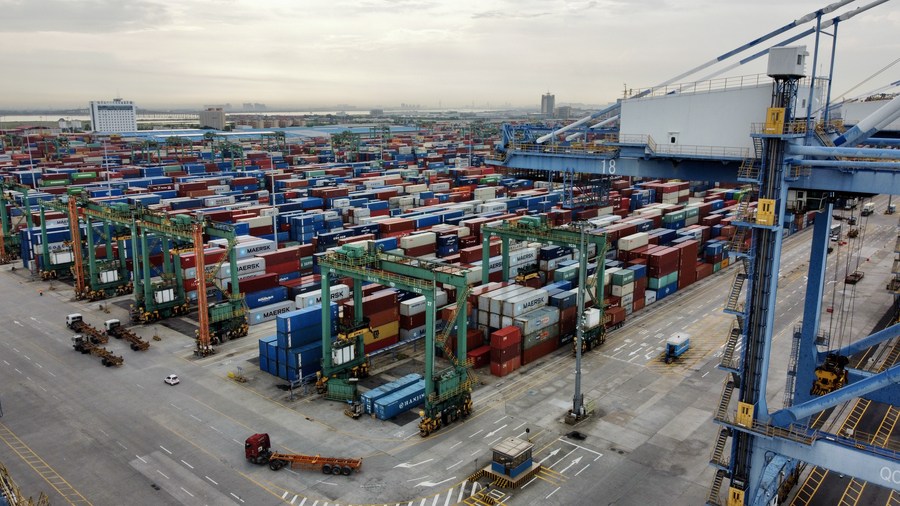 To realize that enormous increase of economy, China must more than double its total factor productivity (TFP) over the next 14 years. Hence, it can no longer rely on the simple extension of traditional medium and low end production, but to pursue a high-quality, high-technology economic growth.

The 20th CPC National Congress has set the strategy of innovation-driven high-quality development pattern to realize that goal, and calls for build-up of a modern industrial system, a new-type industrialization, and moving faster to boost China’s strength in manufacturing, product quality, aerospace, transportation, cyberspace and digital development.

It also holds true for the vast numbers of emerging and developing economies of the world. The only way to shake off poverty and reach a well-off society is high-quality development. The emerging and developing economies should pursue, in accordance with their own specific conditions, a strategy of industrialization based on science and technology advancement and a powerful modern industrial system.

The first is development for the people, which means the ultimate goal of modernization is the tremendous improvement of people’s livelihood. To achieve this goal, a considerable increase of the share of personal disposal income (DPI) in total GDP is imperative. In 2021, China’s per capita disposable personal income was 5,447 USD, 43.4 percent of per capita GDP. It was only 9.9 percent of that in the US which stood at 55,373 USD, 79.9 percent of its per capita GDP. It is imperative for China to increase personal income faster than GDP growth and substantially increase the share of DPI in GDP to at least 50 percent, and preferably to 60 percent. Moreover, income distribution should be more equitable, focusing on larger share going to the low-income groups.

The second is a considerable narrowing of regional income disparities in the country. While the national per capita GDP reached 12,556 USD in 2021, very close to the World Bank high-income economy threshold, the provincial data fell far apart, with Jiangsu at 21,287 USD, equal to Slovak, and Gansu at 6,341 USD, equal to Nicaragua. Guangdong, the largest provincial economy in the country, has a world-renowned developed Pearl River Delta and relatively underdeveloped north, east and west. In 2021, Guangdong’s Shenzhen city had a per capita GDP of 27,070 USD, equal to that of Czechia, while Meizhou had only 5,240 USD, lower than Mauritania, Africa. CPC and the whole country will devote tremendous efforts to narrow the regional disparity for the common prosperity of all the Chinese people. Again, it needs to muster tremendous efforts of the whole country.

The third is a considerable fall in carbon dioxide emissions, as well as to reach peak emissions by 2030 and carbon neutrality before 2060. In 2021, China’s total carbon emissions reached 10.52 billion metric tons, 31.1 percent of the world total. It is China’s global obligation to peak out the emission by 2030 at the latest, and preferably before then, to fight the world climate change. In this regard, tremendous investment in clean energy technology will only increase.

The three essentials and China’s determination to high-quality development reflect the essence of modernization with Chinese characters: it is led by CPC, guided by Xi Jinping Thought on Socialism with Chinese Characteristics for a New Era, in pursuance for socialism, for the happiness and common well-being of all its people, for harmony of human and nature and for the shared obligation of protecting the planet - our common homeland.

Modernization and the three essentials of China’s high-quality development pattern will provide convincing experience and food for thought for the vast developing countries of the world.

Opening-up and BRI: common prosperity for all peoples

General Secretary Xi Jinping reaffirmed in his report to the 20th CPC National Congress that China is committed to its fundamental national policy of opening to the world and pursues a mutually beneficial strategy of opening up. China upholds true multilateralism.

In the contemporary world with mounting geopolitical risks, China has put forward Global Development Initiative (GDI) for building an open global economy that delivers greater benefits to all peoples alike. China clearly opposes the wrong mentality of cold war and the fragmentation of the world to the West and the Rest. The GDI covers all countries of the world, including the East and West, North and South, and upholds peace and development of all countries for the common benefits and prosperity.

China adheres to persistent opening up to the outside world. It has set up 21 free trade zones at home, aiming at becoming a high-level open economy and one of the world best business destinations. China has joined in 19 regional or bilateral free trade agreements, including RCEP, the world largest RTA. China is the largest trading partner of 140 countries and regions, and during the first 9 months of 2022, China’s global trade volume increased by 8.7 percent y-o-y, and its trade with ASEAN, Africa and Latin America increased even faster, by 13.8 percent, 12.5 percent and 11.8 percent respectively.

The Belt and Road Initiative (BRI), proposed by President Xi Jinping in 2013, has achieved fruitful results over the past 9 years. BRI is, in essence, a new pathway of multilateral cooperation. It entails not only numerous projects between China and Belt and Road countries, but also cooperation among Belt and Road countries other than China. For instance, during the second BRI Summit in April 2019, among 35 major agreements on physical connectivity and economic corridors, 16 were between China and other countries while 19 were among other countries themselves. The so-called “China’s Marshall Plan” is absolutely nonsense.

The first and foremost goal of UNSDGs is “no poverty”. A World Bank study in April 2019 revealed that, through investments and assistance under BRI, 34 million people will be lifted out of medium poverty. Among others, 1 million people in Kenya and Tanzania and 1.3 million people in Pakistan will get rid of poverty by 2030.

Goal 8 calls for decent work and economic growth. BRI projects have covered over 80 industrial parks, with 5400 plus businesses, having created 370,000 jobs and 4.3 billion USD local tax.

The world today is under multiple challenges: the unprecedented COVID-19 pandemic, the Ukraine crisis, world energy crisis, the worst inflation in over 40 years and food risks and debt distress in many low-income developing countries.

Under these circumstances, the world solidarity, instead of political fragmentation and supply chain disruption, is of crucial importance. China will continue to appeal and act for world solidarity, for fighting the risks together, so as to overcome the current difficulty and secure a resilient, sustainable growth future for a shared destiny of all humanity.

He Weiwen is a senior fellow of Center for China and Globalization (CCG) and former Economic and Commercial Counselor at Chinese Consulate General in New York and San Francisco. The article reflects the author's opinions, and not necessarily the views of GDToday.