A total of five Guangzhou expats were presented with permanent resident ID cards at a special ceremony held in the Guangdong provincial capital on June 16.

A total of five Guangzhou expats were presented with permanent resident ID cards at a special ceremony held in the Guangdong provincial capital on June 16.

The new cards will offer great convenience to the five overseas residents, two of which are foreign experts who came to China as part of the "1,000 Talent Plan", a Chinese government project to recruit high-level foreign talent. 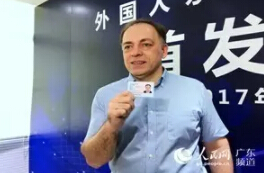 A foreigner shows off his new permanent ID card at a special ceremony in Guangzhou on June 16. [Photo/gd.people.com.cn]

The issuance of the new permanent resident ID card is part of a government effort to improve its service to foreigners living in China.

The new permanent residence cards not only allow holders to avoid time-consuming annual renewal procedures, but also make it much easier for a foreign resident to complete a huge range of everyday tasks such as buying train tickets, opening bank accounts and starting a business. 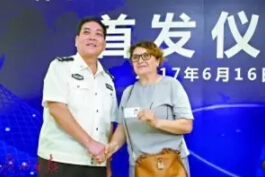 An official poses for a group photo with a foreign expert after granting her the new permanent ID card. [Photo/ news.dayoo.com]

"Although I don't look like a Chinese, I feel like one when I got this card," said an expat from Austria whose Chinese surname is Sima, who runs a restaurant in Guangzhou and has lived in the city for 16 years. 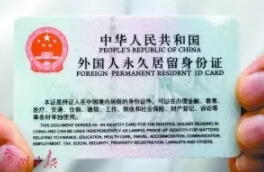 A couple from Russia was also granted the new ID card on June 16. The couple have been doing business in Guangzhou for more than 13 years and said their new cards function just like a Chinese person's ID card.